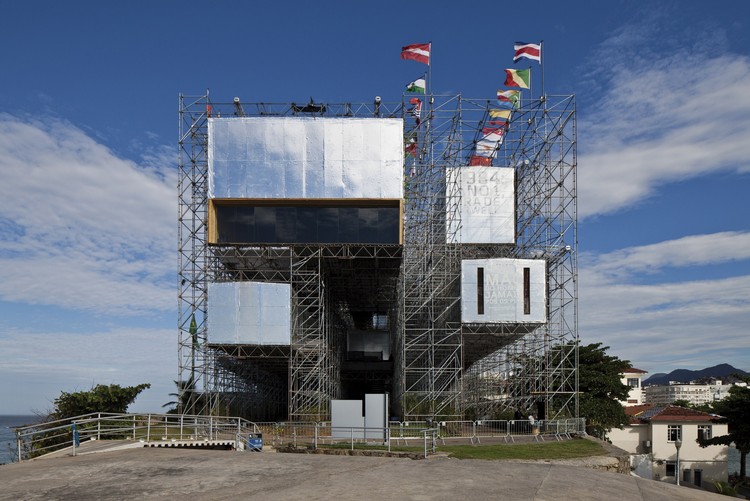 Text description provided by the architects. Our main idea with this project was to come up with an exhibition where space and project was one and the same: the space is the exhibition itself.

In these spaces showcasing different dimensions and functions, we meant to highlight contemporary issues concerning man and how his activities, since the Industrial revolution, have affected our world today (Anthropocene). The space would showcase these and other main ideas that were discussed during Rio +20, and also expose ways in which Brazil can act on these changes.

We were given a site in a military base, an unstable terrain. Facing two of Rio’s most well-known beaches, Ipanema and Copacabana, and surrounded by exuberant nature, the wind blows harshly, usually at 120km/h (74.6mph)

Our first contact with the site was during a promotional event (this space is available for rent for many different activities). For the occasion they had installed a 8.000m2 (26.2sqft) plastic tent, with a strong air conditioner and a 250m (820sqft) porch facing Copacabana beach.

We were certain about not using materials frequently used for temporary exhibitions (plastic tents, blowups), though we were aware of the provisional character of the project.

The impracticability of these materials was obvious straight from the start. We couldn’t do without the breeze, the view and site, to work in just another space that could be exposed anywhere else, not blending in with its surroundings.

We understood sustainability as a way of making use of elements that the site and the climatic conditions presented. How could we turn way from the wind, sea, sun, the rain, ever so present and impressive at the Copacabana Fort?

Carla Juaçaba, the architect responsible for the project, was the one who came up with the idea of leaving the scaffold structure exposed, creating a synthesis with the surroundings. To reveal, not shield. Scaffolds that were being used in plastic tents, would be brought to light allowing the landscape to interact with(in) the space.

We could use the material that was there, at least part of it. This was all settled at the beginning of the work. We then thought of freeing the conventional exhibition spaces and rooms from the ground. The spaces would be accessed by “ramps”. On the ground floor the structure would convey tunnels that lead all the way to the sea. The breeze would be felt naturally, as the tunnels wouldn’t cut through them.

Gardens would be planted along these halls, becoming “exhibition halls” themselves. This is the start off moment when the synthesis between space and information is established. This garden would represent the abundance of flora in different biomes and would spread itself within and out of the structure. The scaffolds highlight its full potential as structure of support, transparency and transmits a cozy feeling, through its bigger and smaller voids. To access the rooms there’d be minor ramps not requiring any extra effort, so that the visits can be enjoyed swiftly.

The rooms would serve as spaces for reflection, of inner search, closed, shielded at times from the nature surrounding it – an invitation for a personal and intimate reflection. In some rooms we’d take advantage of the wind and natural light as elements of the exhibition itself, while in others we would need the absolute control of light and temperature.

We wanted to state clearly that the use of technology and other of man’s achievements given his and nature’s (protection/conservation) shouldn’t be discarded, but used consciously when necessary, judgment free. This doesn’t mean we are denying our ideology, creating a sustainable space.

The rooms would be considerably apart from one another, so when the visitor can experience the inside/outside contrast, and delight himself in this contradiction. Out there the world, the weather, nature and the grand Metropolis. Inside, a trip to the visitor’s private world. His interaction with the exhibition information is subjective, individual.

We wanted the intervention of the view and weather to be used as exhibition materials, insomuch as the texts, sculptures, drawings, machines, etc. The metropolis would seem farther and farther away depending on the height of the building. The metropolis is the exhibit itself, exposed, seen from different angles and perspectives. “The city”, as once defined by the Brazilian architect, Paulo Mendes da Rocha, “is the biggest human invention”. The walls of the spaces facing Copacabana would be made into “led walls” exposing information on different contents, establishing, this way, an immediate connection with the district, titleholder of the highest population density of Rio de Janeiro. A concrete soliloquy. 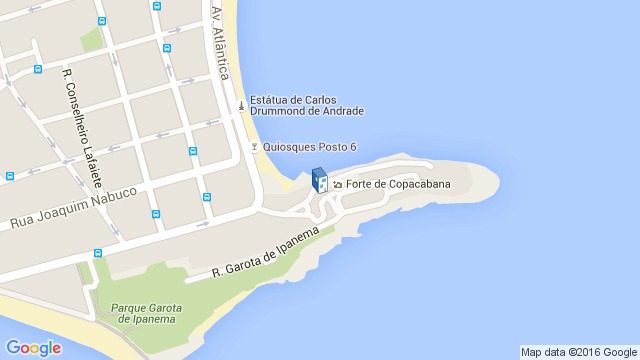 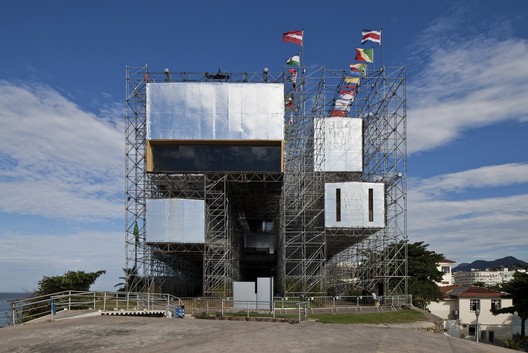