Architects and urban designers CHYBIK + KRISTOF have announced the ground-breaking of their redesign of Brno’s Zvonařka Central Bus Terminal in the Czech Republic. Self-initiated by the architects in 2011, the project involved preserving the existing Brutalist heritage structure while addressing the need to rethink the terminal for contemporary needs. The project reimagines an iconic landmark and its role within the city.

As the team notes, the Zvonařka Central Bus Terminal was designed in 1984 and built in 1988 in response to insufficient capacity of bus stations across the city. Since then, the terminal has acted as the region’s main bus station for intercity transport. Eventually established as a Brutalist heritage site, the terminal's high maintenance costs led to minimal upkeep, and eventually, its gradual deterioration. To preserve the structure and local heritage, CHYBIK + KRISTOF created a contemporary redesign to open up the terminal to the city.

Following the original square floor plan, the redesigned main hall is an open structure devoid of walls. Envisioning it as an intrinsically public space, CHYBIK + KRISTOF will replace the existing stands – temporary structures added in the 1990s – with an information office, ticketing and waiting areas as well new platforms. By removing the temporary stands, they provide a second entry to the station at street level. Drawing a clear path to buses and various services, the proposal aims to transform the building into social hub.

With completion set for 2021, this initial redesign acts as the first stage of a broader reconstruction and urban renewal project, with changes to the surrounding areas to follow. 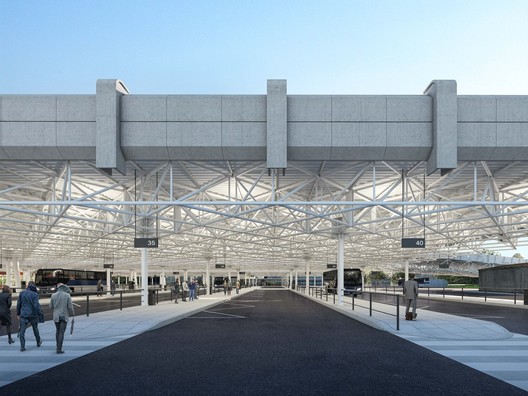