KCAP in collaboration with Orange Architects, and A.Len Architectural Bureau as co-Architect, have imagined a proposal to transform the former Tovarno-Vitebskaya railway yard on Ligovsky Prospekt into a new residential district with communal facilities, retail, and extensive greenery, in the south-eastern part of the grey belt of St. Petersburg, Russia. 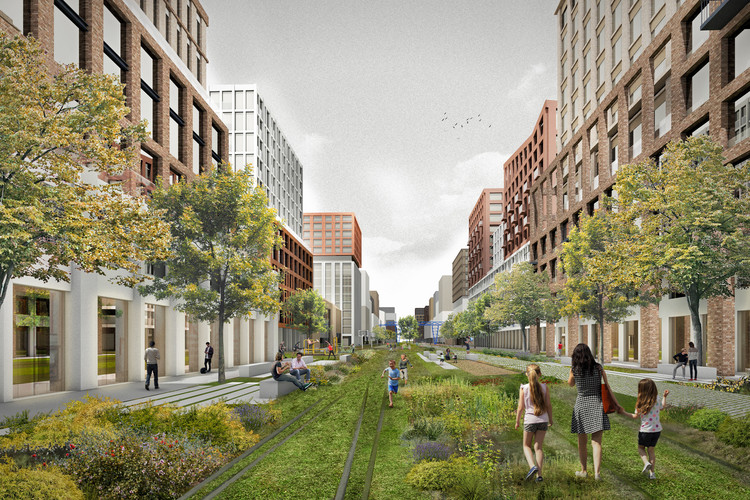 Entitled Ligovsky City, the project is “an adaptive re-use intervention that promotes new urban life, based on a mix of historical and modern structures and on the contrast between large and small scale solutions”. It proposes an urban solution while preserving the architectural memory of the place.

We want to create an active and landscaped environment where you can feel the history of the railway and live with the people around you. An area that simultaneously is smoothly connected to the city of St. Petersburg. -- Patrick Meijers, partner at Orange Architects.

Designed for 8600 people, the new framework puts in place linear parks and landscaped boulevards, following the historical railway tracks. Using the existing spatial organization of the site, the design places buildings varying between 6 and 15 floors height on the pre-existing platforms. Moreover, bigger and smaller volumes are stacked with contrasting industrial facades recalling the heritage of the site.

On another hand, the long green corridors in the building fabric of Ligovsky City, running along the North-South direction, generate multiple outdoor spaces from walkways to quiet corners, from running tracks to yoga fields. “While the public parks are developed along the main railway tracks there are also more intimate walkways and the courtyards between the buildings. This creates a network of smaller and more private open spaces for the residents and the users of the communal facilities”.

Part of the Glorax Development's Ligovsky City neighborhood development project, the proposal will be well connected to city, with plans for the "Borovaya" metro station, to the north of the site are on their way. 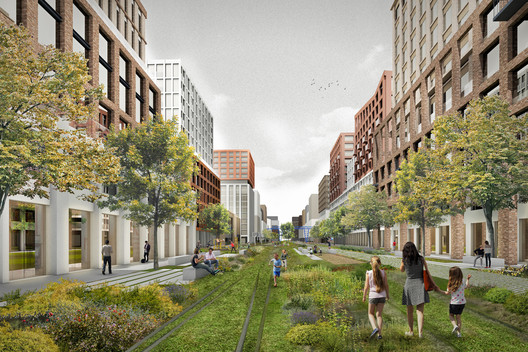