Moving away from its early exclusive focus on natural disasters, resilient architecture and design tackles the much tougher challenge of helping ecosystems regenerate.

Thirty years ago, as a high school student at the Cranbrook boarding school in suburban Detroit, I wrote a research-based investigative report on the environmental crisis for the student newspaper. I had been encouraged to do so by a faculty adviser, David Watson, who lived a double life as a radical environmentalist writing under the pseudonym George Bradford for the anarchist tabloid Fifth Estate. His diatribe How Deep Is Deep Ecology? questioned a recurring bit of cant from the radical environmental movement: Leaders of groups like Earth First! frequently disparaged the value of human life in favor of protecting nature.

Today, we hear some version of this more and more: Earth will continue to exist; nature will rebound, with or without people. It is resilient, we are not.

Resilience’s rise as a framing discourse in the United States emerged out of the devastation Hurricane Sandy visited on New York City. Major weather events have continued to rack U.S. coastlines in the years since, as they have cities and countries elsewhere. In response, architects and engineers have devised plans for building littoral berms, mounds, and other artificial barriers to absorb the beating destined for coastal cities. The suggestion is a humbling one: Human habitats must be fortified because they, like ourselves, are vulnerable to the caprice of much larger planetary forces.

Of course, these projects take as their prerequisite levels of investment and political nerve that don’t yet exist. America’s network of “gray” infrastructure has long been in decline and is barely able to support expected behaviors, let alone repel storm surges. When Hurricane Harvey flooded Houston, storm management systems were easily overwhelmed. Freeways terminated in rivers; subdivisions half-disappeared under a thick layer of muddy brown. Similar images surfaced this past September, when Tropical Storm Imelda—the fourth “500-year” storm event in as many years—emptied more than 40 inches of rain onto the Houston region. While municipalities have enacted measures to combat extreme rainfall and flooding, they cannot keep pace with the storms; as a partner of the design firm re:focus partners told the New York Times in October, “Implementation is going to take way longer than a single hurricane season.”

But even assuming the necessary infrastructure was in place, the militaristic insistence on repelling and withstanding “nature” reveals itself to be a pathology: It overrides concerns about ecology, landscape, or sociology that otherwise inform the best resilient practices and policies being developed today. Indeed, it is hard to disentangle this shriveled conception of resilience from notions of self-sufficiency, discipline, and steely bodily strength. “Gray” and “green”—or, rather, “blue”—infrastructures begin to look very similar.

An expanded concept is needed and exists, says Frederick R. Steiner, dean of UPenn’s Stuart Weitzman School of Design and co-editor, with Richard Weller, Karen M’Closkey, and Billy Fleming, of Design With Nature Now (Lincoln Institute of Land Policy, 2019). The book, like the eponymous exhibition and symposium it draws on, revisits the Scottish-American landscape architect Ian McHarg’s 1969 monograph and amplifies its latent strategies of remediation, renewal, restoration, and regeneration. Aspects of resilience, a concept that had yet to acquire its new meaning in McHarg’s time, resonate with each of these approaches. But there are differences as well, says Steiner, who finds “regeneration” the better umbrella term. “Regeneration involves recovery and rebuilding,” he notes, but it also “improves ecosystems by contributing to ecosystem services rather than depleting them.”

In 2015, Steiner co-founded The Sustainable SITES Initiative, which certifies landscape projects similarly to the way LEED certifies building projects. Among SITES’s “guiding principles” are the mandates to “do no harm,” “design with nature and culture,” and “provide regenerative systems as intergenerational equity.” This last point helps properly situate resilience—which Steiner (like many in the fields of ecology and landscape design) characterizes as “bouncing back to an original state”—within a wider agenda of regeneration. (Meanwhile, the RELI standard, developed by the global architecture firm Perkins and Will, and steered by the U.S. Green Building Council since 2017, locates “regeneration” among a horizontal tier of five so-called metapatterns, along with resilience, restoration, sustainability, and wellness. The parallel arrangement implies that these rubrics are complementary and conceptually coterminous.)

Following both McHarg and his mentor, the landscape architect John Lyle, Steiner understands regeneration as “creating something new grounded in the deep structure of the place.” While resilience is certainly inherent in the “deep structure” of landscapes, so are biodiversity, ecosystem feedback, redundancy, change, and ephemerality. Drawing on new- and urban-ecology studies, a regenerative framework not only admits these properties but seeks to enhance them.

The pages of Design With Nature Now are flush with regenerative examples. The Great Green Wall aims to combat desertification in the African Sahel through continent-wide tree planting. In North America, the ongoing Yellowstone to Yukon Conservation Initiative is creating a wildlife corridor extending from northwestern Canada to Yellowstone National Park by linking protected areas, improving conservation practices, and building animal-safe highway overpasses and underpasses.

Not only do these projects share in a broader enterprise of reversing ecological degradation, but they also point to the centrality of regulation in achieving this aim. For instance, the L.A. River master plan was prompted by a 2010 ruling by the Environmental Protection Agency that subjected the channelized river to the guidelines of the Clean Water Act. Yu’s initiative was greatly assisted by the Chinese Ministry of Ecology and Environment and the Chinese Ministry of Culture. Regulatory mandates, not voluntary resilience measures (e.g., certification systems like SITES and RELI, or competition-based exercises like Resilient by Design), are the teeth behind ecological regeneration.

For architect Anna Rubbo, senior scholar at the Center for Sustainable Urban Development (CSUD) at Columbia University’s Earth Institute, the 193-nation Paris Agreement is one such framework. “If you’ve got so many countries making a commitment to this, it’s a good idea to get behind them,” Rubbo says, emphasizing that the climate emergency does not recognize borders. “Because of the breadth of the goals, they provide a framework that can be very powerful.”

The United Nations’ 17 sustainable development goals (SDGs), adopted by the Paris Agreement, informed CSUD’s latest initiative to promote design projects around the world conforming to these aims. The criteria of the Local Projects Challenge range from self-evident factors, such as increasing energy efficiency, to the deeper social ones driving the climate crisis, such as providing access to freshwater and building resilient urban communities. (The most up-to-date thinking on resilience transposes the concept from disaster scenario to the realm of socioeconomics.) The final report, released in November, casts a wide net, pointing to 100 building works from Tanzania to Nepal, New York to Los Angeles. For example, the Koning Eizenberg–designed Arroyo complex demonstrates how SDGs and other mandates don’t hamper but elevate design. The project, a 64-unit affordable multifamily housing development by the Community Corporation of Santa Monica, California, features thermal rooftop panels to heat water and high-efficiency cooling to conserve energy. The landscaped courtyard also sports an irrigation system and drought-tolerant plants to conserve potable water. Crucially, the development will link up with the new Expo light-rail line upon the latter’s completion.

It’s true that the literature underpinning SDGs emphasizes resilience over regeneration, while subsuming both under the more nebulous (and marketable) rubric of “sustainability.” Perhaps a focus on the Paris Agreement is moot, given the Trump administration’s recent move to withdraw from it. Instead, the Green New Deal, argue its proponents, offers the best hope for putting the United States on the fast track toward economic and climate resilience. It promises to do this through a ten-year period of national mobilization propelled by massive public investment and innovative legislation. Funding would be allocated for “community-defined projects and strategies”; new construction would be regulated according to ecological mandates; and existing buildings would be retrofitted with energy-efficient technologies.

For the moment, the Green New Deal exists only as a hazy resolution, but its importance lies in its ability to galvanize activists and designers alike. There is, moreover, no reason why SDGs cannot be folded into such a “deal,” as the CSUD itself suggests. Which is to say, the Green New Deal is open to further articulation. The current document, for instance, mentions regeneration only in relation to agricultural practices. But extending the concept to ideas already incubating in the realm of architecture and landscape design—one thinks of “sponge cities” and, yes, the fascination with artificial berms, mounds, and barriers—is necessary, says Iñaki Alday, the new dean of Tulane’s School of Architecture. He advocates “[recovering] the connection to our geographic elements—to our rivers, to our topographies, to our forests or agricultural lands that surround the city,” and we might add, contra the Earth First! activists of yore, to ourselves. 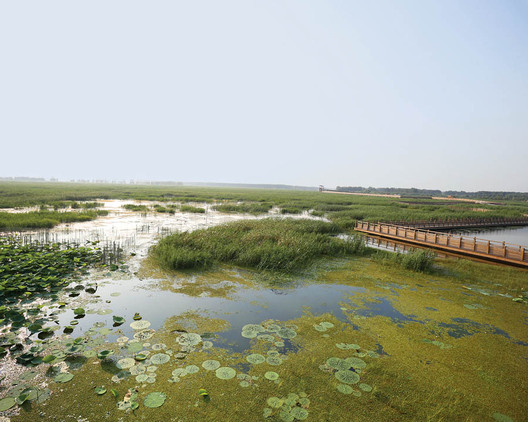