In his book "Life 3.0", MIT professor Max Tegmark says "we are all the guardians of the future of life now as we shape the age of AI." Artificial Intelligence remains a Pandora's Box of possibilities, with the potential to enhance the safety, efficiency, and sustainability of cities, or destroy the potential for humans to work, interact, and live a private life. The question of how Artificial Intelligence will impact the cities of the future has also captured the imagination of architects and designers, and formed a central question to the 2019 Shenzhen Biennale, the world's most visited architecture event.

As part of the "Eyes of the City" section of the Biennial, curated by Carlo Ratti, designers were asked to put forth their visions and concerns of how artificial intelligence will impact the future of architecture. Below, we have selected six visions, where designers reflect in their own words on aspects from ecology and the environment to social isolation. For further reading on AI and the Shenzhen Biennial, see our interview with Carlo Ratti and Winy Maas on the subject, and visit our dedicated landing page of content here.

Eyes of the City: Seeing and Designing Beyond the Human / Jeanne Gang

The advance of AI technologies can make it feel as if we know everything about our cities—as if all city dwellers are counted and accounted for, our urban existence fully monitored, mapped, and predicted.

But what happens when we train our attention and technologies on the non-human beings with whom we share our urban environments? How can our notion of urban life, and the possibilities to design for it, expand when we use technology to visualize more than just the relationship between humans and human-made structures?

There is much we have yet to discover about our evolving urban environments. As new technologies are developed, deployed, and appropriated, it is critical to ask how they can help us see both the city and our discipline differently. Can architecture and urban design become a multi-species, collaborative practice? The first step is opening our eyes to all of our fellow city dwellers.

For all of their history, the machines around us have stood silent, but when the city acquires the ability to see, to listen and to talk back to us, what might constitute a meaningful reciprocal interaction? Is it possible to have a productive dialogue with an autonomous shipping crane loading containers into the hull of a ship at a Chinese mega port; or, how do we ask a question of a warehouse filled with a million objects or talk to a city managing itself based on aggregated data sets from an infinite network of media feeds? Consumer-facing AIs like Amazon’s Alexa, Microsoft’s Cortana, Google Assistant or Apple’s Siri repeat biases and forms of interactions which are a legacy of human to human relationships. If you ask Microsoft’s personal digital assistant Cortana if she is a woman she replies “Well, technically I'm a cloud of infinitesimal data computation.” It is unclear if Cortana is a she or an it or a they. Deborah Harrison, the lead writer for Cortana, uses the pronoun she when referring to Cortana but is also explicit in stating that this does not mean she is female, or that she is human or that a gender construct could even apply in this context. “We are very clear that Cortana is not only not a person, but there is no overlay of personhood that we ascribe, with the exception of the gender pronoun,” Harrison explains. “We felt that ‘it’ was going to convey something impersonal and while we didn’t want Cortana to be thought of as human, we don’t want her to be impersonal or feel unfamiliar either.”

AI (artificial intelligence) can transform the environment we live in. Cities are facing the rise of UI (urban intelligence). Micro sensors and smart handheld electronics can gather large amounts of information. Mobile sensors, referred to as “urban tech,” allow cars, buses, bicycles, and even citizens to collect information about air quality, noise pollution, and the urban infrastructure at large. For example, noise data can be captured, archived, and made accessible. In an effort to contribute toward urban noise mitigation, citizens will be able to measure urban soundscapes, and urban planners and city councils can react to the data. How will our lives change intellectually, physically, and emotionally as the “Internet of Things” migrates into urban environments? How does technology intersect with society?

Biocities beyond the Digitial / Vicente Guallart

Thanks to the development of the digital world, cities can be part of natural history. This is our great challenge for the next few decades, The digital revolution should allow us to promote an advanced, ecological and human world. Being digital was never the goal–it was a means to reinvent the world. But what kind of world?

In many cases, digital allows us to continue doing everything we invented with the industrial revolution in a more efficient way. That’s why many of the problems that arose with industrial life have been exacerbated with the introduction of new digital technologies. Our cities are still machines that import goods and generate waste. We import hydrocarbons extracted from the subsoil of the earth to make plastics or fuels, which allow us to consume or move effectively while polluting the environment. Cities are also the recipients of the millions of containers filled with products that move around the world, and where we produce waste that creates mountains of garbage.

Whose Eyes on the Street / Liu Jian

We may imagine that one day, when a city was full of sensors to give it the ability of watching and hearing, data could be collected and analyzed as much as possible to make the city run more efficiently. Public space would be better managed to avoid any offense and crime, traffic flows be better monitored to avoid any traffic jam or traffic accident, public services be more evenly distributed to achieve social equity in space, land use be more reasonably zoned or rezoned to achieve a land value as high as possible, and so on. The city would function as a giant machine of high efficiency and rationality that would treat everyone and everything in the city as an element on the giant machine, under the supervision and in line with the values of the “hidden eyes and ears.” But, the city is not a machine, it is an organism composed of first of all numerous men who are often different one from another, and then the physical environment they create and shape in a collective way. Before the appearance of the city full of sensors, man needs to first work out a complete set of regulations on the utilization of sensors and the data they collect to deal with the issues of privacy and diversity.

How Does Architectural Design Change When the City Becomes Equipped with the “Most Recent Advances in Artificial Intelligence”? / Alessandro Armando, Giovanni Durbiano 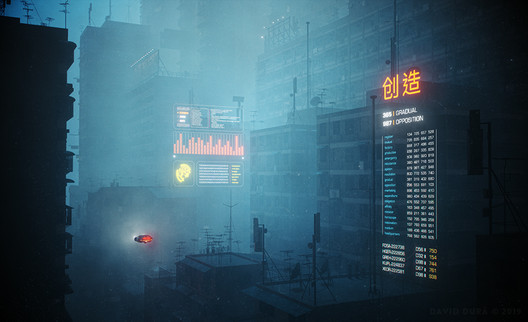