Thanks to the development of the digital world, cities can be part of natural history. This is our great challenge for the next few decades.

The digital revolution should allow us to promote an advanced, ecological and human world. Being digital was never the goal–it was a means to reinvent the world. But what kind of world?

In many cases, digital allows us to continue doing everything we invented with the industrial revolution in a more efficient way. That’s why many of the problems that arose with industrial life have been exacerbated with the introduction of new digital technologies.

Our cities are still machines that import goods and generate waste. We import hydrocarbons extracted from the subsoil of the earth to make plastics or fuels, which allow us to consume or move effectively while polluting the environment. Cities are also the recipients of the millions of containers filled with products that move around the world, and where we produce waste that creates mountains of garbage.

We have the ability to buy and pay for everything digitally, but we do not know where what we consume comes from, or where its waste goes. Cities have learned to manage everything more efficiently–even their own pollution.

We live in an era of instantaneous super-globalization, where the digital has soaked the physical world to make it more efficient, but it has not reinvented its vital principles.

Each new technological paradigm, like the digital world, is an opportunity to redefine our world and our cities. The challenge of cities is no longer their digitalization, but how this shift could make them more ecological and human.

Technology should benefit the biological world, promote human life and the development of natural species.

The digital revolution allows us to share knowledge and reinvent our cities while working as a team. Digital technologies should not be tools of control, but of human empowerment.

The digital world is already a fact. The destruction of the natural world has accelerated through the industrial and digital era, especially in cities. Considering that there are still emerging countries in Asia, Latin America and Africa where more than two billion people will migrate to cities in the coming years, it’s fair to wonder–what kind of future awaits us?

One possible solution could be to transform cities into an extension of the natural world–to prevent the planet from destroying us through climate change. Humans will not destroy the planet, but they can destroy themselves. The planet has suffered multiple catastrophes throughout its history and has always overcome them by creating a different natural environment. Human beings are but a small part of the history of the planet.

The new technological revolution must begin in the most densely populated cities, where the majority of our emissions take place. The great challenge for humans is to transform cities into bio-cities. We have to design and build cities that function more like forests, like self-sufficient ecosystems that produce the resources they need to thrive, and that promote life.

If the digital world allows us to be connected, global shared knowledge should allow us to produce resources locally, using clean and advanced production systems.

Cities and their surroundings should be places that produce energy, food and goods–and all production and consumption processes should be completely traceable. The great urban battle is not between analog and digital, but between centralized and distributed systems.

We should use new digital technologies to rebuild porous networks, as if these were neural systems that connect people, processes and things–and empower cities.

Today, we still consume energy from coal-fired power plants that emit CO2 into the atmosphere. These are located in the heart of many cities, and are generally accepted for the sake of progress and accelerated economic development.

With digital networks, cities could implement a blockchain of energy where each building can generate energy through photovoltaic systems and consume it, store it or share it as needed. This would require big transformations in urban design, as well as in the management and economy of cities.

Nature has developed distributed systems where millions of elements are connected and form part of complex ecosystems that promote a more balanced way of life. This should be our urban model for the digital era.

Big data, robots and artificial intelligence are already embedded in cities. We should put them at the service of humanity and ecology. They should help not only reduce, but completely eliminate CO2 emissions in cities.

Advanced urban reindustrialization should be put at the service of local economies. The digital world should encourage social interaction and make people feel in control of their own destiny. This, in turn, would build stronger local communities

The increased ability to obtain and organize information should help us better understand the potential of natural resources characterizing each territory, and should help us figure out how to use and distribute them in a sustainable way.

This way, cities can promote a type of bio-economy that integrates our environmental resources, without destroying them to produce–for instance–biofuels, ecological food, bioplastics, carbon fibers of lignin, or construction materials such as wood or bamboo.

If climate change is humanity's greatest challenge, we should dedicate our efforts to building cities that, more than emit, absorb CO2 from the atmosphere.

We should build cities that behave like forests and buildings that act–and react–like trees. We should promote the development of a new eco-civilization.

Design should be put at the service of this vision. Too many times we designed buildings and cities that reinforce existing models and preserve the status quo. It is a moment of paradigm shift, and we should learn to work in an environment where the digital and the biological merge.

Cities survive in the material history of the planet as a materialization of the culture that created them. We are at a crucial moment in history. We can decide whether to accelerate the construction of the industrial city through digital technologies, which will lead to systemic collapse, or if the time has come to promote a new ecological culture, building cities for human life. New digital technologies allow us to build bio-cities for our future.

Vicente Guallart, was chief Architect of Barcelona 2011-15. He is the founder of the Institute for Advanced Architecture of Catalonia (IAAC) in 2001 and a professor at the Higher School of Economics in Moscow. He is leading the international practice Guallart Architects, who has won recently several Urban Planning competitions in Shenzhen. He is author of many book including “The Self-sufficient cities”, “Geologics” and has been the editor of the English edition of The General Theory of Urbanization” and Urbanization.org. 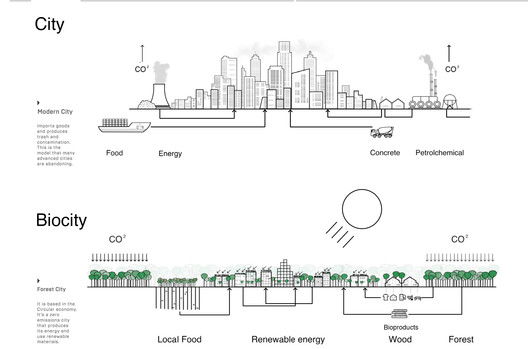