Save
Is Coronavirus Pandemic Accelerating the Digitalization and Automation of Cities?
Share
Or
Copy

For nations worldwide, the course of action to fight the spread and effects of coronavirus COVID-19 has been to implement quarantines; restricting the movement of the general population while isolating people infected by the disease, albeit indefinitely. The result: both public and private spaces have closed in a bid to curb the number of new cases. At the same time, the rising number of deaths has added to both social and economic uncertainty, with people across the globe asking "how are we going to work?" or, better yet, "how are we supposed to eat?"

For many work places, "home office" has become the new norm to keep things running, leading many to question the future of public transportation and mass mobility. With exponentially fewer people commuting, urban centers are experiencing a drastic decrease of air pollution (and many people find themselves with hours of free time to fill with a good book, virtual museum tours or Netflix documentaries). The impact of COVID-19 has also left its mark on the academic sphere, forcing schools and universities to move classes online, leaving students and teachers alike to reflect on the pros and cons of virtual and in-person lessons while also calling into question the costs associated with educational infrastructure and how they affect access to learning. Attention has also turned to the e-commerce and distribution sectors, where robots and drones are filling in the gaps left by human workers and forcing many in the sector to speculate about the future of jobs for a large portion of the population.

For people who don't have the luxury of working from home on a laptop, like builders, drivers, and other in-person laborers, days in quarantine mean days without work and, consequently, lost wages. This "can't-work-can't-eat" dilemma is captured vividly by Martín Caparrós in his book Hunger: "...we know hunger, we're used to hunger. We feel hunger two, three times a day. This is nothing more constant, more present in our lives than hunger--and yet, for most of us, there's nothing further removed from us than real hunger."

In the current economic climate, driven majorly by in-person jobs but simultaneously marked by informal work and under-employment, the future of many jobs, as well as the people who fill them, is at a cross-roads. This is on par with the World Economic Forum's 2016 report that predicted the loss of 7.1 million jobs between 2015 and 2020, mostly thanks to "artificial intelligence, robotics, nanotechnology, and other socio-economic factors that will replace the need for human workers." Increasingly, diseases are also playing a part in determining the course of the global economy and the movement of people within cities; however, this is nothing new as history shows us.

The Black Plague that ravaged Eurasia during the 14th century killed over 30% of Europe's population, decimating the continent's workforce and crippling its socio-economic infrastructure. The need to fill the labor gaps left by the pandemic led to a multitude of technological as well as societal innovations that came to be known as the European Renaissance. During this time, inventions like the printing press changed the way humans communicated and urban design increasingly emphasized ventilation and illumination to improve the lives of those living in cities. Centuries later, further developments in urban sanitation were made as the Hygienist Movement led the fight against tuberculosis outbreak in Paris, prompting scientific research that led to the optimization of public spaces by way of proper ventilation and exposure to sunlight. In fact, many of the trends that we see in architecture and urbanism today are derived from the same measures taken over a century ago to ensure the health, hygiene, and comfort of urban residents.

The preoccupation with population growth and its effects on urban centers in the coming decades is no small matter, especially when considering how it will impact work and mobility (a theme explored in this year's Venice Biennale 2020 with How Will We Live Together? by Hashim Sarkis, now postponed due to the Coronavirus outbreak). Not only will there be almost 10 billion on planet Earth by 2050, but the majority of them will live in cities. With the ever present threat of a new pandemic, the question is how will we face this challenge in the age of digitalization and automation?

New innovations, along with new materials and the latest technologies, are becoming more accessible by the day, redefining how products are distributed and how people work. Take for example open source furniture that you can download, print, and build online. Meanwhile, brick-laying robots are changing the rules of construction and we are entering the golden age of 3D printing. Are we on the verge of human-free production and construction?

In his book From Animals to Gods, Yuval Noah Harari talks about what he calls "history's biggest fraud;" that is, the idea that humankind is happier now than we were before the agricultural, scientific, and industrial revolutions or whether or not we have fallen into the trap of luxury. “Nobody plotted the agricultural revolution or sought human dependence on cereal cultivation. A series of trivial decisions aimed mostly at filling a few stomachs and gaining a little security had the cumulative effect of forcing ancient foragers to spend their days carrying water buckets under a scorching sun." It's time to think about where we direct our energies as humans and to reassess the work that we do that brings us the most happiness; and the cities that will allow us to do that.

In the meantime, the question remains--is it a pandemic that's speeding up the digitalization and automation of our cities? 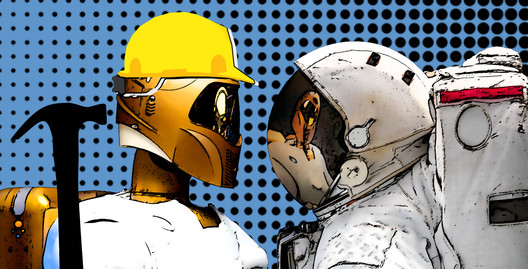