It's not science fiction: the MIT Technology Review warns that the current debate over raising the minimum wage for fast food employees in the United States would accelerate their own automation. On the other hand, Silicon Valley personalities and millionaires like Elon Musk and Richard Branson warned that the impact of automation will force the creation of a universal basic income to compensate not only the massive unemployment that would generate these new technologies but also the hyper-concentration of the global wealth.

One advocate of this idea is the British economist Guy Standing who wrote at the Davos Forum that it "would be a sensible precaution against the possibility of mass displacement by robotization and artificial intelligence," but will automation affect architects? Will we really be replaced by robots?

Think for a moment about your parents, grandparents, and great-grandparents work: during the 20th century, hundreds of businesses emerged and disappeared as new technologies emerged and consolidated. Academics Ian Wyatt and Daniel Hecker estimated that in 1910 about 32% of the US population was involved in agriculture, while professionals and technicians did not exceed 5%. Ninety years later, only 1% remained in the field, while those with professional training accounted for 23%.

If you think about it, today we are talking about social network experts, data scientists, UX designers, renderers, drone specialists, application developers, virtual reality creators, architects specializing in 3D / BIM / special effects / sustainability or even if they work on ArchDaily and the whole ecosystem of the world of architecture on the Internet. For these new jobs, it is necessary to learn new technologies and exercise skills that have not been previously evaluated by the job market. However, this training takes years and resources: we know that those who lost their jobs in metallurgy or agriculture were not immediately data scientists. This formative and generational transition is painful.

Authors like Guy Standing speak of the precariat, a fragile new social class, overqualified, hired at zero hours and highly prone to populism. In this sense, the emergence of applications like Uber has effectively created new economies around them - also called "collaborative" - but they have not necessarily created quality jobs: there are no pensions, no social protection or paid holidays, but a freelance disguised as collaboration.

Let's go back to architecture: Future of Jobs projects that, for the five-year period ending in 2020, jobs related to computing, mathematics, engineering and architecture show "solid growth." In the case of these two last fields, this would be thanks to the growth of the middle class in emerging markets, climate change, 3D printing massification and geopolitical volatility, among other factors. On the other hand, The Telegraph newspaper estimated the automation probabilities of 700 jobs, from a University of Oxford study published in 2013. The good news? Architects have one of the lowest replacement rates (1.8%), in a comfortable position with stylists (2.1%), aerospace engineers (1.7%), curators (0.7%) microbiologists (1, 2%), theatrical makeup artists (1%), anthropologists (0.8%) and choreographers (0.4%).

So, what do the most difficult jobs to replace have in common? Many of them require a high level of human interaction and have a low percentage of repetitive activities in their workday. David J. Deming, a professor at the Harvard School of Education, crossed job offers published in the United States between 1980 and 2012 with the skills needed for each job. Deming concluded that those employees who "successfully combine mathematical and interpersonal skills [...] should find many rewarding and lucrative opportunities" in the future, highlighting soft skills such as empathy and cooperation.

In that way, Mark Cuban postulated in the last edition of the SXSW conference cycle in the United States that jobs related to cognitive skills, critical thinking and creativity would be less exposed to be replaced by robots:

In this sense, a recent study by University College London (UCL) and the University of Bangor postulates that sculptors, architects, and painters "seem to relate to a different spatial conceptualization that manifests itself in a systematically contrasting way of speaking about space." That is a spatial perception that distinguishes us as architects but also separates us from the rest of society by sharing and disseminating ideas to those who are not specialized.

Automation and artificial intelligence, for the time being, would not replace architects, but this does not mean that the discipline does not undergo profound transformations in its exercise: computers and software eliminate tedious repetitive activities, optimizing the production of technical material and allowing, among other things, atomize the size of architectural offices. Each time fewer architects are needed to develop more complex projects.

On the other hand, the saturation of the labor market motivated thousands of architects to take advantage of their learned skills to cross other disciplines. And while some are still tangled in rusty discussions about whether we should project with pencil or mouse; Virtual reality, 3D printing and the advances that artificial intelligence continues to show continue to shape discussions about our profession in the coming years. With or without robots. 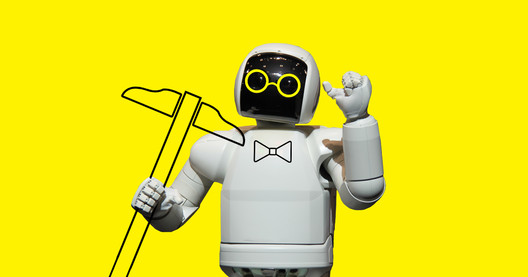