Robots: The Latest Architecture and News

Labour in the Documedia Age

In 2013, Michael Osborne and Carl Benedikt Frey ranked 702 occupations according to their probability of computerisation in the near future, from least probable (“recreational therapist”) to most probable (“telemarketers”). "Architectural and Engineering Managers” was ranked seventy-third, and “architects” eighty-second, while “architectural and civil drafters” ranked three-hundred and fifth. Clearly, technological advancements in fields such as machine learning and robotics are rapidly confronting us with issues of changing professional demand and qualifications. In this essay, Maurizio Ferraris turns the table on us: what if what we should be concerned with is not maintaining the human element in labor as production, but rather recognising human labor as consumption? Expanding on the arguments of his 2012 book, “Lasciar tracce: documentalità e architettura,” the author sees in automation an extraordinary opportunity in defining a renewed centrality of the human element, as the production of value associated with digital exchange is read through the three concepts of invention, mobilization and consumption.

Michael Perry of the Robotics Company Boston Dynamics joins the podcast to discuss the release of Spot 1.1, and how their company is using robotics to revolutionize the construction industry.

Will architects be one of the professionals who will be replaced by AI in the near future? New York-based artist Sebastián Errázuriz recently opened the debate in one of his latest Instagram videos.

Errázuriz, also known for his critique/proposal of the reconstruction of the Notre-Dame church, says that it is very likely that the future of the profession as we know it might disappear. Thanks to technological advancements, only a small elite of architects who maintain architecture as an artistic practice might be the ones who will continue to practice the discipline as we know it.

The World’s First Dynamic Bridge and Autonomous Boats in Amsterdam

The roundAround project, developed by researchers at MIT Senseable City Lab, in collaboration with the Amsterdam Institute for Advanced Metropolitan Solutions, is basically a bridge made of autonomous boats called Roboats. The least traditional solution, roundAround, but the most versatile and modular answer, connects the waterway between Marineterrein and the City Center in Amsterdam, allowing the transportation of people and goods.

Digital technology has broken into the timber construction scene at ETH Zurich, where a research team is using programmed robots to construct load-bearing timber modules. These modules are being used to stabilize the top two levels of their DFAB HOUSE project, a three-story residential unit located in Dübendorf, which aims to bring a variety of digital construction methods together under one roof. 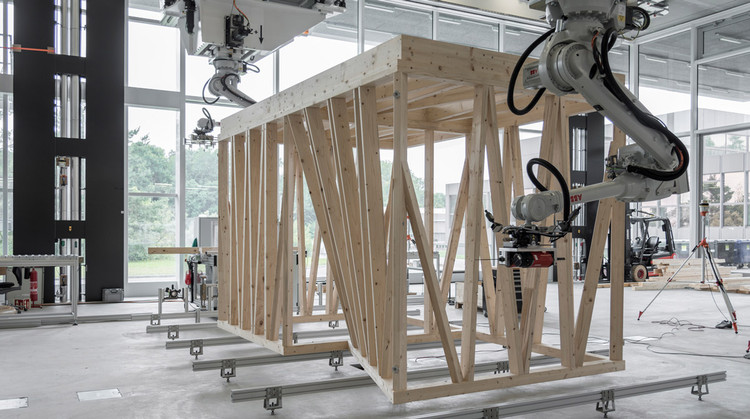 It's not science fiction: the MIT Technology Review warns that the current debate over raising the minimum wage for fast food employees in the United States would accelerate their own automation. On the other hand, Silicon Valley personalities and millionaires like Elon Musk and Richard Branson warned that the impact of automation will force the creation of a universal basic income to compensate not only the massive unemployment that would generate these new technologies but also the hyper-concentration of the global wealth.

One advocate of this idea is the British economist Guy Standing who wrote at the Davos Forum that it "would be a sensible precaution against the possibility of mass displacement by robotization and artificial intelligence," but will automation affect architects? Will we really be replaced by robots?

The IAAC (Institute for Advanced Architecture of Catalonia) has developed a series of advanced materials and systems for air conditioning and passive ventilation, allowing homes to reduce interior temperatures up to 5 degrees lower while saving the electricity consumption caused by the traditional air-conditioning. The systems are made from long-lifespan materials, which lower the costs of maintenance in the long-term and can be used as low-cost alternative building technologies.

The projects highlighted are the Breathing Skin, Hydroceramics, Hydromembrane, Morphluid and Soft Robotics - all developed by students of the IAAC's Digital Matter Intelligent Constructions (conducted by Areti Markopoulou). The passive air-conditioning of spaces is investigated using a combination of new materials that mimic organic processes, adaptive structures and Robotics that help regulate temperature and create sustainable micro climates.