The IAAC (Institute for Advanced Architecture of Catalonia) has developed a series of advanced materials and systems for air conditioning and passive ventilation, allowing homes to reduce interior temperatures up to 5 degrees lower while saving the electricity consumption caused by the traditional air-conditioning. The systems are made from long-lifespan materials, which lower the costs of maintenance in the long-term and can be used as low-cost alternative building technologies.

The projects highlighted are the Breathing Skin, Hydroceramics, Hydromembrane, Morphluid and Soft Robotics - all developed by students of the IAAC's Digital Matter Intelligent Constructions (conducted by Areti Markopoulou). The passive air-conditioning of spaces is investigated using a combination of new materials that mimic organic processes, adaptive structures and Robotics that help regulate temperature and create sustainable micro climates.

Facades and light structures like Hydroceramics, Breathing Skin or Hydromembrane have been developed by the IAAC during recent years. By creating a series of systems that act like a second skin in buildings, IAAC transforms a building’s thermoregulation to imitate the human body -transpiring water to regulate the temperature.

Hydroceramics is a façade system made of clay and hydrogel panels capable of cooling building interiors up to 5 degrees. Hydrogel capsules have the capacity to absorb up to 500 times their own weight in water to create a construction system that "breathes" through evaporation and perspiration.

Unlike Hydroceramics, parallel inventions Hydromembrane and Breathing Skin are based on compounds made with fine membranes and intelligent fabrics for buildings that act as a second "respiratory" skin for constructions capable of self-regulating the humidity and climate of indoor and outdoor spaces.

Each system uses materials that have a high capacity of water absorption, which is later released by evaporation - creating a cooling effect in warm environments. As an example, Breathing Skin absorbs up to 300 times its volume in water in a relatively short period of time thanks to the presence of superabsorbent polymer called sodium polyacrylate.

IAAC has also designed more alternatives that focus on structures and applied robotics in the new “bioclimatic architecture”. Morphluid or Soft Robotics (SORO) are created as passive shading systems using "live roofs" that regulate the amount of light and heat entering the spaces.

Soft Robotics is a lightweight and sensitive robotic shading device that attempts to create microclimate by controlling sunlight, ventilation and temperature to humidify the atmosphere. This robotic prototype adopts different sizes and shapes as the artificial "sunflowers" that project shade the moment its integrated liquid element is evaporated by the heat of the sun.

Morphluid is also based on the transition of liquids as an activator that modulates the roof and adjusts the environment by means of shading. Morphluid integrates two water tanks into a movable structure (a roof, a window) that tilts when the water in one of the tanks evaporates, allowing shade to continuously project and refresh the environment.

The IAAC academic director and project manager, Areti Markopoulou, highlights "the potential of advanced systems and materials to help us have the most pleasant temperature in our homes through more sustainable buildings that breathe and behave the living things and interact with their environment." Markopoulou Also highlighted the importance of this innovation to energy saving, since "passive air-conditioning materials and systems are based on principles of physics such as evaporation to cool spaces."

To learn more about each project, check out the gallery below: 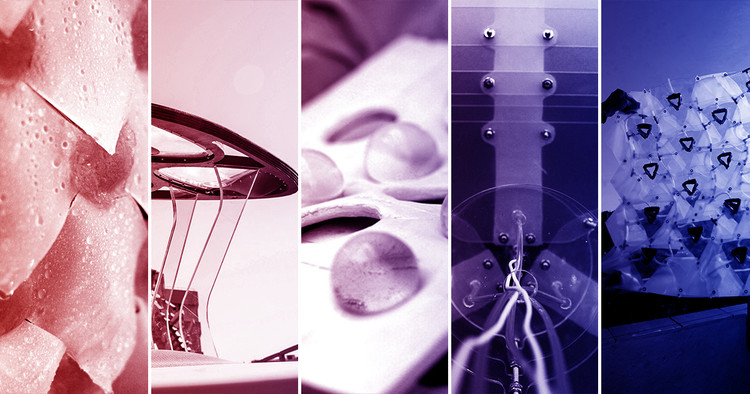