Save
Project Galath3a: a Woman-Machine Collaboration at the Berlin Open Lab
Share
Or
Copy

Exploring the use of innovative technologies in architecture and practicing at the crossroads between art and spatial design, Gili Ron and Irina Bogdan have imagined project Galath3a, a woman-machine collaboration. The research-based venture uses a UR5 robotic arm named Gala (short for Galatea), to speculate on what is culturally considered as "womanly behavior". 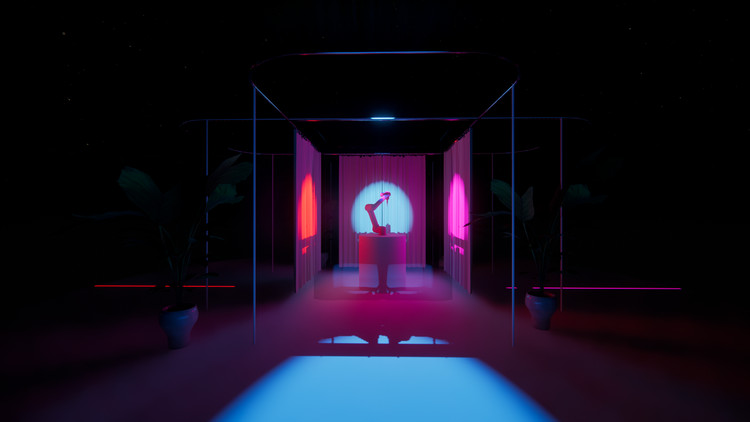 Investigating women's image in the digital age, the fem-tech initiates its work with a Robotic Mirroring process that studies human-gestures, by recording and translating actions into a machine-path. With the robot as mimic, Mirroring, the designers question the nature of these behaviors: are they necessary? Should it be passed on? If so, how could we enhance it to empower women?

The name of the project relates to the myth of Pygmalion and Galatea. Galatea is the image of the perfect woman created by sculptor Pygmalion, for his pleasure. […] We wanted to reverse this relationship. Here, the instrument is regarded as equal and is invited to partake in co-creation. This way we challenge the image of women in the digital age moving away from perfection, away from the male gaze, and into kinship of women and machines. -- Gili Ron and Irina Bogdan

Developed currently as a live installation, for audience participation, the project includes many cutting-edge technologies such as Robotic fabrication with UR5 cobot (her name is “Gala”), robotic path-planning in Rhino-GH-Robots, photogrammetric 3D scans, etc. In addition, tools like CAD-CAM are used to digitally design. Performed at the Berlin Open Lab and associated with Universität der Künste, Berlin (UDK), under Prof. Tim Elder and associate Christian Schmidt, the project is simulated and tested on the designers’ faces, with a process involving gestures and gentle touch, by a robotic arm.

We find digital tools advantageous because they give way to new occurrences to “woman” or “feminine” and allow us to reverse gender roles and power structures. […] This is already seen in digital filters and CGI influencers: alternative lifestyles, genders, body types and feminisms emerge, made-public and empower marginalized communities. -- Gili Ron and Irina Bogdan

Gili Ron, a digital designer at Burckhardt+Partner, with Irina Bogdan, former designer at Studio Tomás Saraceno have been researching on woman-machine collaboration at the Berlin Open Lab, Universität der Künste, Berlin. Raising questions about sexuality, gender biases, and human-machine kinship, the initiative focuses on “the act of applying makeup and hacks it because it is synonymous with the notion of “perfection”, the commoditization of the woman-body and the male gaze”. In fact, it includes Hi-Res 3D facial scans and digital design of bespoke painting-patterns. The robot arm is taught how to carefully approach humans, and paint their faces. To build trust between people and machines, gestures are introduced into the machine-path; and with repetition, simulation, and gentle touch, trust is gained.

We see great similarities between a human placing trust in a machine and consent between humans. In this sense, writing machine-code and controlling how we are approached and touched is very empowering. -- Gili Ron and Irina Bogdan.