Located on a tight urban site at the edge of campus, Berkeley Way West is expressed as two interlocking L’s that create a stacked forum, or two distinct, multi-level atrium spaces around which the building is massed and the program is oriented. This strategy creates a social heart for the building, optimizes buildable square footage, pulls in natural light, and responds to both the urban and campus conditions.

Weighted towards a major commercial artery directly to the west, the larger mass rises to eight stories and picks up on the life of the street with ground floor retail and storefront vitrines topped by offices that look out onto the city. The lower massing, containing academic classrooms and departmental offices, steps down towards a midblock walkway, pedestrian plaza, and garden that connect to UC Berkeley’s campus to the east. Corten steel, raw concrete, and a light, glassy façade articulated with aluminum fins further distinguish Berkeley Way West as a building that is both of its campus and its city.

Activated by the public realm, the lower forum of the multi-level atrium connects city street to university plaza with circulation, retail, and informal social spaces, inside and out. In contrast, the light and airy upper forum cues the privacy needed for focused work and study with skylights that flood the terrazzo interior with indirect light. With ample break out areas, the forums offer a stand-in for the campus quads for which the site did not have space.

It was important to UC Berkeley that the three different academic departments be equally represented, with their particular identities integrated into the architecture. The multi-level atria helps make evident each department’s identity as part of the fabric of the interior space. The culture of each department is expressed by exposing collaborative, public program elements—meeting spaces, certain offices, and learning environments—to the atrium, while private functions move to the building perimeter. Signage and a vibrant paint palette further distinguish each group.

Berkeley Way West introduces a more efficient and thus different—fewer private offices, less square footage per person—way of working and meeting for academics. Careful attention was paid to understanding each department’s culture and needs to help ensure they’d thrive within their new home. For example, Public Health required the ability to draw boundaries around groups writing NIH grants, Psychology favored open and collaborative workspaces, and Education expected private offices with ample windows. In response, the design team developed a flexible “work canvas,” or kit of parts that aligns with UC standards, while allowing for a specific response to the needs of each department.

The result is a variety of comfortable, healthy, learn/work spaces that democratize access to stunning views and daylight and feel uniquely “owned” by each group. The speculative office portion of the building was approached similarly, with the goal of offering each tenant the ability to customize their own space while feeling embedded in the community and the city. 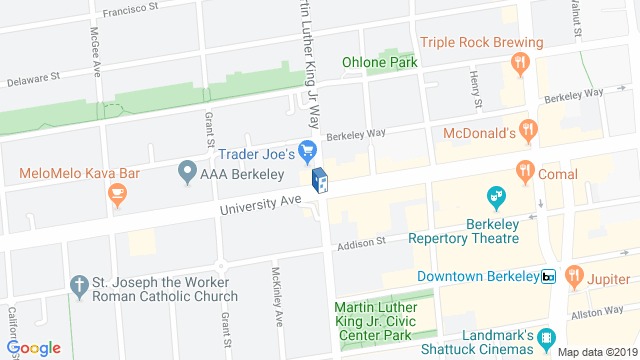