Bauhaus: a school, a design discipline, and a movement that has been influencing generations of architects and designers for 100 years.

The school was a lot more than modernist designs and primary colors, it was a movement with a political, social, and cultural impact, led by some of the most notable figures in the field. Since its inauguration in 1919, the school has defined its own style through the intersection of architecture, art, industrial design, typography, graphic design, and interior design. When the school was forced to close its doors in the face of political pressure, its professors and students dispersed, spreading its teachings across the world.

While the Dessau campus remains one of the most significant symbols of the movement, we have put together an architecture guide of Bauhaus-influenced structures around the world that are still standing to this day.

Black Mountain College
1933
North Carolina, United States
Just as Bauhaus was closing its doors in Berlin, a school with a similar education program was opening its doors in the United States. The Black Mountain College, which was founded by John Andrew Rice, Theodore Dreier, Ralph Reed Lounsbury, and Frederick Raymond Georgia, was fundamentally different than other design schools in the nation. Its multidisciplinary design approach marked it as a prominent chapter in American art history, originating true American avant-gardism.

The New Bauhaus, Laszlo Moholy-Nagy / Mies van der Rohe
1937
Chicago, Illinois, United States
The New Bauhaus is perhaps one of the biggest Bauhaus-inspired structures on the North American continent. After having taught at Bauhaus from 1923-1928, Moholy-Nagy moved to the United States, extending the school’s teachings across the ocean and founding the New Bauhaus. Towards the mid-20th century, the school became part of the Illinois Institute of Technology. Former Bauhaus member, van der Rohe planned the entire campus of the institute and headed its architecture department. Its most notable structure is considered to be the Crown Hall, which became home to the design school in 1955.

Gropius House, Walter Gropius
1938
Lincoln, Massachusetts
After fleeing Europe, Gropius and his wife settled in Massachusetts when he began teaching at Harvard’s Graduate School of Design. The house they settled in was designed by the architect himself, in full Bauhaus manner. Back then, the United States were not yet familiar with the school’s principles and found the house to be remarkably bizarre and out of place.

The Alan I.W. Frank House, Walter Gropius and Marcel Breuer
1940
Pittsburg, USA
When the duo began teaching at Harvard’s Graduate School of Design, they were commissioned by Frank’s father to build him a family house. Their designs were not just limited to the architecture itself, but to the fittings and furniture as well, making the residence a truly unique property.

Aspen Institute, Herbert Bayer and Fritz Benedict
1949
Washington D.C, United States
In 1945, Chicago businessman Walter Paepcke contacted Bauhaus artist and architect Herbert Bayer, who had designed and built a Bauhaus-inspired residence near the town of Aspen, in the Roaring Fork Valley. Both imagined a place where creative minds could gather, and Bayer took the surrounding landscape and created an architectural response to it.

Ariston Hotel, Marcel Breuer
1948
Mar del Plata, Argentina
The now-abandoned hotel was originally designed for social gatherings and parties by the Hungarian architect. The modernist building is an icon of the movement in Argentina, distinguishing itself with its curved clover-like form and panoramic glazing.

Fagus Factory, Walter Gropius
1911
Alfeld-Hannover, Germany
Before founding Bauhaus, Gropius had already begun foreshadowing his design principles throughout his early designs. He designed the Fagus Factory as an open space for shoe craftsmanship, with plenty of sunlight and refined geometric structures. The factory’s structures have been listed as historic monuments since the mid-20th century, and are still functioning to this day.

Bauhaus, Walter Gropius
1926
Dessau, Germany
After continuous political resentment in Weimar, the school was forced to relocate, settling in Dessau. Instead of being afflicted by the move, Bauhaus experienced its prime days at the German city, becoming labeled as an international design school. Gropius took the opportunity to build a school with a more futuristic approach than the original campus, bringing about new designs and programs for the masses, and inaugurating some of the most notable architects to date.

Master’s Houses, Walter Gropius
1926
Dessau, Germany
Only images remain of the private houses built by Gropius as they were all destroyed during the Second World War. The double-houses were built as private residences for the Bauhaus directors and himself, all designed with the school’s design principles. However, the houses were reconstructed in 2014 by German firm Bruno Fioretti Marquez with a contemporary impression.

Ulm School of Design (HfG), Max Bill
1953
Ulm, Germany
The design college’s influence matched that of Bauhaus due to its multidisciplinary context of combining arts, crafts, humanities, and technology. The structure remains intact today under the protection of Foundation Ulm, as a historically significant building for design and the region.

Bauhaus Archive, Alex Cvijanovic and Hans Bandel (Original plans by Walter Gropius)
1979
Berlin, Germany
Gropius was originally asked to design Bauhaus’ archive museum during the 1960s but was delayed for political and financial reasons. Aftera few years, construction began but with modified plans by architects Cvijanovic and Bandel. Perhaps the only remaining elements from the architect’s original design are the unique silhouettes of the shed roof. As for the museum, it holds exhibitions, books and art collections, workshop models, and photographs, all belonging to the history of Bauhaus.

Bauhaus Museum, Prof. Heike Hanada
2019
Weimar, Germany
The newly-opened concrete structure is located at the founding place of the Weimar State Bauhaus. Hanada followed the school’s minimalist approach, and developed a 5-story cubic building, with a clearly defined geometric form and horizontal grooves all around the facade. The museum’s permanent exhibition is designed and curated by Barbara Holzer of Holzer Kobler Architekturen and houses the world’s oldest Bauhaus collection.

Zentrum Paul Klee, Renzo Piano
2005
Bern, Switzerland
Gropius was first intrigued by Klee’s work when the latter published “Creative Credo”. He was invited to Bauhaus to give workshops on printing and painting, among many other practices. Ever since then, he has been considered as one of the “masters” of Bauhaus. To honor his work, Klee’s grandson compiled his archives of notes, paintings, and artworks, and exhibited them in a museum designed by architect Renzo Piano.

Isokon Buildings, Walter Gropius
1934
London, United Kingdom
Before moving to America, Gropius designed his English “exile” home with the same styles and techniques he had used in his projects and teachings. Isokon, which is the contraction of Gropius’ design company “Isometric Unit Construction”, was then joined by Marcel Breuer and Laszlo Moholy-Nagy, both of whom had had an input in the firm’s graphic and furniture designs.

Sonneveld House, Johannes Brinkman
1933
Rotterdam, Netherlands
Bauhaus and the Dutch De Stijl movement drew a lot of inspiration from one another. Their complimentary influence is evident in the residential project built for one of the directors of the Van Nelle factory.

Obafemi Awolowo University, Arieh Sharon
Early 1960’s
Ile-Ife, Nigeria
The Israeli architect believed that his most “decisive challenge” took place in Nigeria when he was chosen by a local government and architecture firm to build a new university in the city of Ife. The vision of the project was to show that the country has moved on from the British rule. For that, Sharon “tropicalized and contextualized” Bauhaus, giving the Modernist movement a sense of Africa by integrating ethnic designs within the buildings’ facades and structures. The buildings were designed as upside-down pyramids, providing shade and protection from the sun and rain, and maximized the natural air-flow within the spaces.

Residential Projects, Arieh Sharon
1930’s
Tel Aviv, Israel
When the Jews began streaming to Palestine from all over the world, they brought along with them European teachings to reshape the city they were settling in. Sharon, who was a Bauhaus graduate, moved to Tel Aviv in 1931, implementing the school’s architecture and design teachings in almost all of his residential projects. The city is now considered one of the most Bauhaus-influenced cities globally, nicknamed as the White City.

Poli House, Shlomo Liaskowski
1934
Tel Aviv, Israel
Among the approximate 4,000 Bauhaus-inspired buildings in the city, the triangular-shaped Polishuk House is one of the most notable. Situated on a strategic six-point intersection, the architect implemented the teachings of Bauhaus and integrated horizontal glass strips alongside the cornered facade. Now, the structure stands as a boutique hotel.

The National Institute of Design, Charles and Ray Eames
1961
Ahmedabad, India
The couple received an invitation from the Indian government to develop the first design training school in the country. The couple bridged together tradition and modernity, designing what is now regarded as one of the best design schools in the world.

The country had held another milestone for the design school, as it housed the first-ever Bauhaus exhibition outside Germany in the Indian city of Kolkata in 1922.

Delhi Zoological Park, Habib Rahman
1974
New Delhi, India
After India declared its independence in 1947, Rahman needed to build new institutions in the fastest and simplest means possible. His first project was a modern Mahatma Gandhi memorial, which impressed the prime minister and encouraged him to design government buildings, public spaces, and its national zoo.

University of Baghdad, Walter Gropius
1957
Baghdad, Iraq
As Iraq began investing in large projects, Gropius was commissioned to design an enhanced campus of the University of Baghdad. He designed the structures with intricate attention to the climate conditions of the country, letting air flow through the building and protecting the interior with a double-layered façade. Only a few buildings were completed though: the tower block, ceremonial arch, and mosque. The idea of having a non-Muslim German architect build a mosque in a Muslim city seemed rather surprised at the time. However, the architect managed to design what is considered as one of the best mosque structures ever built. Instead of supporting the dome with walls, the architect chose to replace them with arches, allowing access into space from all sides yet maintain the same structural support of walls.

The Vienna-born architect was taught by renowned Bauhaus members throughout his education and career: Gropius in 1945 at Harvard, Josef Albers in 1946 at Black Mountain College, and worked for Breuer while in New York. After moving to the Australian city, he built a house for his parents with the principles of Bauhaus.

The Torin Building, Marcel Breuer
1976
Penrith, Australia
After being commissioned to build the offices and factories of the Turin Corporation, Breuer was commissioned to design Rufus and Leslie Stillman’s house in the city of Penrith. The residence, which is Breuer’s only project in Australia, was built for almost $5 million with engineering features very avant-garde and innovative for the 1970s.

An architecture guide of Bauhaus-influenced structures around the world that are still standing to this day. 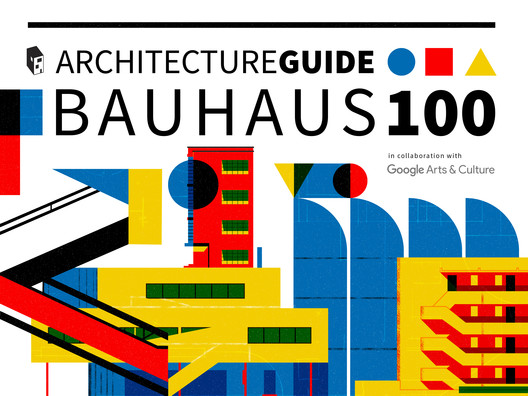