As construction evolves, new advancements are shaping how we design. These movements are the product of shared ideas and the convergence of building technologies that open up new possibilities for architecture. From the atomic scale of materials to preassembled homes and faraway planets, the changes in BuildTech are felt across industries. As a result, disciplines are learning from one another to reimagine how we build. 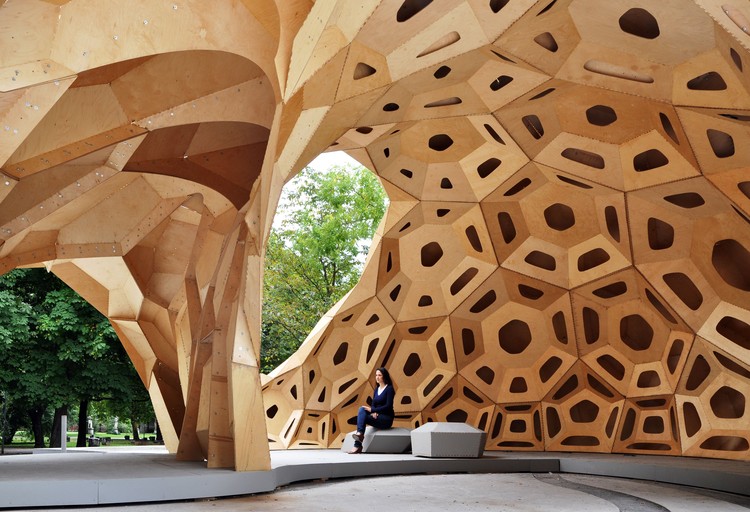 New advances have been widespread: the company Upbrella Construction is addressing construction inefficiencies to create high rises 20% faster by starting with the roof, augmented reality tools are allowing workflow solutions for AEC professionals, and we are looking up to the stars as we imagine new settlement ideas. Between these developments, we begin to get a picture of what tomorrow’s BuildTech processes look like, and where emerging technologies are taking us today.

Unsure what BuildTech encompasses? Take a closer look at what BuildTech means as part of this month’s innovation topic. From drones and 3D printing to modular marketplaces, new modes of construction also present new possibilities to address sustainability, delivery methods and the job market. As changes in construction happen at faster and faster rates, organizations and firms are working to rethink repetitive tasks and past assumptions about the limits of tectonics and materials. The following articles highlight BuildTech trends that have begun to emerge, and some that are already underway.

Dwellito is designed as a platform to help find, compare, purchase and get a modular home shipped to a location within weeks. Dwellito curates modern modular homes as a marketplace featuring top performing homes and verified manufacturers. It allows users to know a range of figures, features, and prices to be able to compare homes side-by-side. Dwellito aims to provide transparent pricing, unbiased reviews, and an explanation of the process in simple terms. Once you’ve found a modular home you like, we'll get you an all-in estimate. Some homes offer turn-key services, others offer the kit of parts. Dwellito has also partnered with lenders that specialize in ADU homes.

Materials in the Digital Era

With the seemingly permanent presence of the construction worker on site, the deep foundations of the construction industry seemed to be somewhat behind in relation to modernization. Until now. Large social movements, driven by the concept of sustainability, have appeared as a contemporary reaction to economic systems that promote productivity over local artisanal work. The race to achieve efficiency while still respecting the environment has become a powerful driving force that moves the industry to incorporate new manufacturing and construction processes. The development of technologies for rapid mass production—such as prefabrication, 3D printing, and collaborative software—has come to be considered as a fourth industrial revolution.

A technological innovation is revolutionizing one of the oldest professions in the world. Augmented reality has just broken onto the scene and has already been transforming civil construction. The changes are seen not only in designing and modeling, but also in building. Augmented reality benefits the entire construction team: engineers, designers, architects, project managers and service providers. Unlike virtual reality, which creates a totally new and independent environment of the real world, augmented reality includes virtual elements that interact with what already exists. It is thus possible to combine virtual architectural designs with the reality of the construction site, increasing efficiency and accuracy, reducing the occurrence of errors and saving time, money and resources.

Looking to the Stars: Building with 3D Technology

This spring, AI SpaceFactory was awarded first place in the NASA Centennial Challenge. The multi-planetary architectural and technology design agency’s Mars habitat MARSHA was awarded the overall winner in the competition series, which saw 60 challengers in total. The MARSHA habitat offers a glimpse into what the future of human life could look like on Mars, with a prototype 3D printed during the final phase of the competition, including three robotically-placed windows. MARSHA was praised for its smart use of materiality, constructed from a biodegradable and recyclable basalt composite derived from natural materials found on Mars. After withstanding NASA’s pressure, smoke, and impact resting, the material was found to be stronger and more durable than its concrete competitors.

For most of the history of architecture, interesting facades were achieved through materiality or ornamentation. From the elaborately painted friezes of the Parthenon to the glass exteriors of modern skyscrapers, architecture was primarily static, only ‘changing’ as the environment would change and affect the material of the façade in differing ways, be it rain, light, rust, etc. As technology has progressed and facades have transformed – literally – the role of environment hasn’t diminished. Rather, cutting-edge technology has allowed designers to develop architecture that responds to environmental stimuli in more interesting ways than ever. Often, these designs take the form of kinetic facades: architectural facades that change dynamically, transforming buildings from static monoliths to ever-moving surfaces.