People often gather around sports activities, whether they are the ones exercising or the ones cheering. This internationally recognized social interest brings everyone together seamlessly, regardless of their background, gender, culture, ethnicity and so on.

Urban regeneration can take different aspects, and one of the most prominent and efficient solutions that can reconcile a community with itself and its surroundings is a sports function. In fact, this purpose encourages people to reclaim their fundamental right to public spaces and regenerate demoted, hostile or forgotten areas.

Read on to discover examples from all over the world, where physical activities made an urban impact on the neighborhood and the community.

Cancha "LA DOCE" is a collaborative project between love. fútbol (a Non-Profit Organization) and All Arquitectura, aiming to reintegrate public spaces in communities and regenerating sports fields in marginalized areas around the world. Sponsored by local partners and international figures, the intervention builds on the social constructive aspect of the most popular game in the world—soccer, and on the sense of belonging it generates in its players and its followers. Located in Valle de Chalco, Mexico, in a hostile space with high rates of violence, the project’s challenge was to bring together the different types of inhabitants. In fact, "LA DOCE" is a mean of integration, a project that was initially generated with the efforts of numerous professional, authoritative and communal collaborations.

Previously used as a parking space, this abandoned and hostile area under the skyway was converted into a skate-spot by Strelka KB, STRELKA Architects, and Snøhetta. Its proximity to the metro station and the central market helped in implementing the public sports function where young people can gather and play. Limited by driveways on both sides, the small space is fenced for safety reasons. With help from local government, the “Federation of Skateboarding” and “Tsekh”, the project is a collaborative effort to reclaim a neglected and marginalized area by the community.

Difficult accessibility and imposing infrastructure turned the space within the Trinitat road junction in Sant Andreu district, Barcelona into a no man’s land, overlooked and sidelined. Traveled mostly by underground users reaching the station, the space was merely a residual one, perceived dangerous by the neighboring community. The newly implemented sports project guaranteed the collective right for the use of this public space. This multipurpose urban park, one of many in a series of interventions built across Barcelona, changed the old marginalized perception of the area.

Situated behind a series of shops in the city of Taiwan, a once forgotten part of the neighborhood was reintroduced to the community by hosting a new and fresh function on its premises. The revitalization of the space introduced a colorful basketball court, a chill-out spot where people can just take a break. Ready-made materials were utilized in the project and the existing reinforced concrete was used as the foundation of the canopy. Silhouettes of the structure produced by a playful pattern, imitate the waves and the surrounding ocean. Visual connectivity with the landscape is preserved and celebrated.

Los Héroes Park intervention in Mexico is part of a program that builds on the importance of public spaces in regenerating social housings’ unfortunate conditions. In fact, the project aims to abolish segregation in theses urban areas, reconcile abandoned spaces with the community and improve the quality of life. Located in the Unidad Habitacional de Los Héroes Sección III in the city of Toluca de Lerdo, the park introduces different spaces and activities such as children’s playgrounds, a football and a basketball court, and a skating rink. It takes on a flexible layout that allows creative opportunities and improves the relationship between the residents of the neighborhood.

In Pigalle, the area once known for its infamous activities, a basketball court, squeezed between buildings, was redesigned and repainted several times, lastly by Ill-Studio and Nike, in order to keep giving the neighborhood a fresh outlook and a new intriguing identity. Ever since its very first transformation, this space attracted both locals for its social activity and tourists for its picturesque scenery. Specially conceived for the youth in the neighborhood, the Pigalle Duperré is now painted in gradated hues of fuschia, dark blue, canary yellow and burnt orange.

In New Zealand, 600 meters of abandoned and unused highway infrastructure are transformed into a cycling circuit. LightPathAKL conceived by Monk Mackenzie Architects and Landlab is both a linear path in Auckland’s inner city and an urban art. On the city level, repurposing this network regenerated the areas crossed by the path and reunited the people with these forgotten spaces. 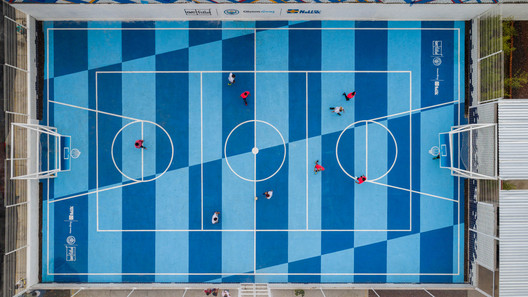