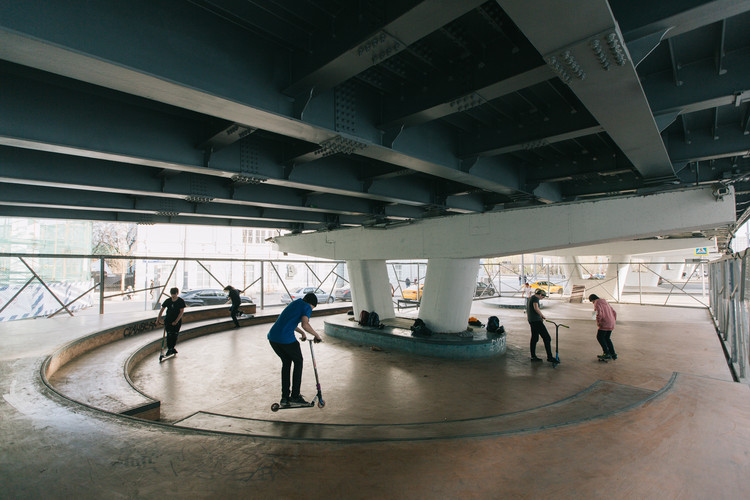 Text description provided by the architects. Creating a skate-spot under the skyway was a part of reconstruction plan of a Garden Ring (a circular avenue around central Moscow). Before the reconstruction, this place under the skyway was used as a parking lot. Thus, it was quite abandoned and featureless. The place is located close to the metro station and a central park, which made it perfect for transforming it into a skate-spot. Now, this public space is a part of Moscow’s social life and a new point of attraction for young people.

By order of Moscow government, Strelka KB, STRELKA Architects, and Snøhetta in cooperation with “Federation of Skateboarding” and “Tsekh” (a Russia-based company which produces and tests the equipment for skateparks) created a new skate-spot. The spot located under the skyway is quite small and there are two driveway roads on both sides. That’s why high fences with safety nets were made. The new public space immediately became popular among skaters and young people. The space near the Krymsky overpass is always crowded - near the Park Kultury metro station and at the intersection of several pedestrian routes. Deserted remained only a zone under the overpass, where there used to be parking.

The idea of a skate park under the junction appeared at the Norwegian bureau Snøhetta, who worked on part of the Garden Ring. To finalize the project of Strelka Architects, they turned to the Skateboarding Federation and the Workshop team, which had been designing skateboards for 10 years. It was the professionals who suggested not to make large-scale figures and great accelerations, which are characteristic of serious skate parks, but to create a simple platform for beginners, since this is such a passing place.

The two-level amphitheater with steps and universal elements is suitable for beginners and for those who want to roll out and work out the movement. To get rid of the monotonous gray color, the floor was filled with special colored concrete. Here you can ride all year round because the overpass protects from rain and sun. The workshop created a spot with an eye on the Krymskaya Square, where many already ride in Moscow or try to get up on the board for the first time. The new place has added missing parts.

Quote by Dasha Paramonova, CEO of Strelka Architects:
“The overpasses are engineering structures excluded from the environment, which should have been returned to the city. We wanted not to mask them, but on the contrary, to emphasize their brutal nature. One possible solution was a skate park. It seemed to us ideal because if in Berlin people are ready to sit in cafes under overpasses, in Moscow, there is still a stereotype that it is impossible here.” 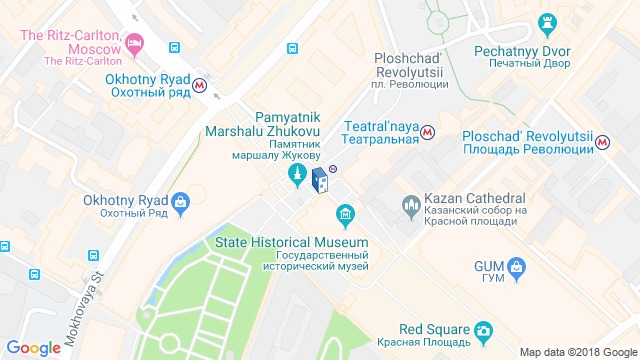 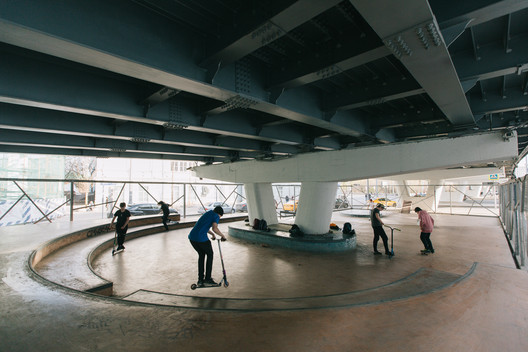