Save
10 Solutions for Adaptive Walls for More Resilient Architecture

The term "resilience" has been employed in a wide range of subjects. The scientific definition is the ability of a substance or object to recover its form after suffering some trauma. In other words, it is quite different from resistance, as it concerns the capability of adapting and recovering. In ecology, resilience is about the ability of an ecosystem to respond to a perturbation or disturbance, resisting damage and recovering quickly. In architecture, however, designing something while having resilience in mind can lead to a variety of approaches. Resilient designs are always site-specific. Predicting the potential scenarios for typical building use, and even any disasters that could challenge the integrity of the project and its occupants is an important starting point. Furthermore, it is possible to address adaptive structures and materials that can ''learn'' from their environment and continuously reinvent themselves. Since there are software and robots with algorithms that learn from their contexts, why can't we use the same approach in construction?

We have selected 10 adaptive materials and solutions that work under the concept of Resilience in Architecture and Construction. We are left wondering whether these solutions will someday become mainstream or merely occasional innovations. 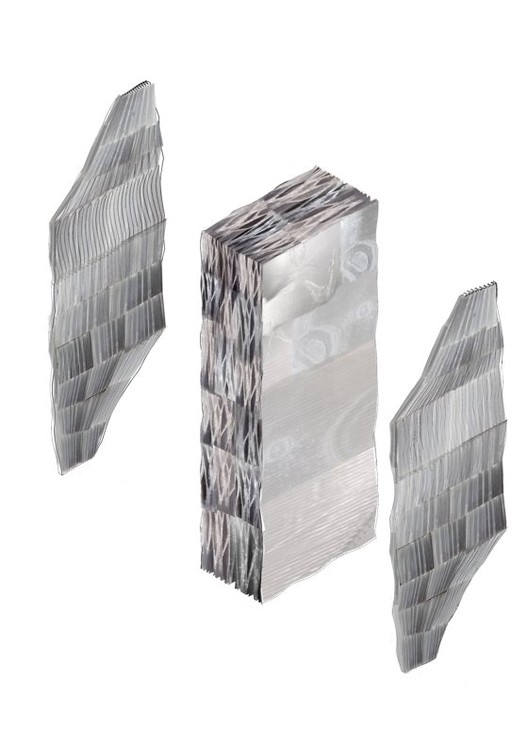 Spong3D is a facade system that integrates multiple functions to optimize thermal performances according to the different environmental conditions throughout the year. The idea is to control the heat transfer between the internal and external parts of the building throughout the year. The proposed system incorporates air cavities to provide thermal insulation and a movable liquid (water plus additives) to provide heat storage where and whenever needed. The movable liquid provides heat storage as it flows through channels located along the outer surfaces of the system (on the indoor and outdoor faces of the facade). Upon need, the liquid can be transferred from one side of the facade to the other in order to absorb and release heat. The composition of the channels and the cavities form a complex structure, integrating multiple functions into a singular component, which can only be produced by using an Additive Manufacturing (AM; like 3D printing) technology.

GEOtube, a proposal from Berkeley-based Faulders Studio, uses saltwater to grow a facade. The proposed facade for a tower in Dubai is to suck up water from the Persian Gulf (the source of the world’s saltiest ocean water) through a 4.62 km underground pipeline, and then spray it over its mesh facade. The building's skin is entirely cultivated rather than built; instead of being fully finished, it is in continuous development. As the water evaporates and salt deposits aggregate over time, the tower's appearance transforms from a transparent skin into a solid, highly visible white surface.

For Abu Dhabi’s newest pair of towers, Aedas Architects have designed a responsive facade which takes cultural cues from the mashrabiya, a traditional Islamic lattice shading device. Using a parametric description for the geometry of the actuated facade panels, the team was able to simulate their operation in response to sun exposure and changing incidence angles during the different days of the year. The screen operates as a curtain wall, sitting two meters outside the buildings’ exterior on an independent frame. Each triangle is coated with fiberglass and programmed to respond to the movement of the sun as a way to reduce solar gain and glare. In the evening, all the screens will close.

In order to deal with the crafting of relationships between information and performance on an architectural level, the project applies this method to the research and development of a responsive shading structure built in conjunction with a thermal testing lab for two test locations – Austin, Texas and Munich, Germany. Developed by Michael Leighton Beaman, Assistant Professor of Architecture at the University of Texas, a responsive parametric model generated from contextual, phenomenological, and solar data is proposed.

Hygromorphic materials are moisture-sensitive materials and can have response driven by wood shrinkage and swelling. These are naturally responsive mechanisms employing the inherent properties of available materials, such as the moisture-induced opening and closing of conifer cones.

A few years ago, architects from the IAAC (Institute for Advanced Architecture of Catalonia) created "Translated Geometries," a responsive model consisting of a triangulated tessellation design using shape memory polymers (SMP), allowing the material to change phase from an external and controlled stimuli, therefore, being able to reach a soft and flexible state upon exposure to heat.

The system is based on an innovative approach to thermal principles of Trombe walls, being about five times lighter than traditional Trombe walls in order to avoid structural overloads in buildings. Double Face takes advantage of the dynamic behavior of phase-changing materials (PCM), as well as its appearance. The elements are translucent; are meant to be located in front of a (full) glass facade, where the largest heat impact from outside happens to be; and can be developed into various design options for new buildings as well as retrofitted into already existing buildings. Additionally, the system is adaptive in order to enhance the thermal benefits. Exposing thermal mass to winter solar radiation (passive heat gain) and protecting it from the summer one (passive cooling) and therefore acting as a thermal buffer. In winter, the PCM side would face the exterior and be thermally charged during the day by the low winter sun. During night times, oriented towards the interior, it releases the accumulated heat. In summer, during the day in combination with external sun shading, it would store the heat from interior heat loads and during the night release this heat to the outside environment by means of night ventilation, thus acting as a cooling plate.

With no need for blinds or solar screens, the adaptive glass solution allows controlling solar gain and maximizing natural light transmittance to the internal spaces automatically, changing its optical and thermal properties according to the variable outdoor conditions, for example, modifying the glass color, from light to tinted, when the solar radiation is intense.

The facade for the project developed by Splitterwerk Architects and Arup consists of microalgae cultivated in glass facade elements that generate heat for the building operation and biomass for the food and pharmaceutical industries. Facilitated by direct sunlight, the small cells that grow rapidly end up heating the water, and this heat is collected by the system and stored for use in the building. The facade can also change color with the continuous growth of algae and thus becoming dynamic.

The prosolve370e is a decorative architectural module that can reduce air pollution in cities when installed near traffic ways or in the construction of facades. The material contains titanium dioxide, which effectively "cleans" the air of toxins releasing spongy free radicals that could eliminate the pollutants. Tiles neutralize air pollutants when installed near traffic or in heavily polluted conditions. Inspired by fractals in nature, the wavy forms maximize the surface area of the active coating to diffuse light, air turbulence, and pollution.