Despite architecture's continued evolution over the course of history, our use of structural materials has remained largely the same since the advent of modern building materials. This reality may be changing thanks to the development of new materials seeking the same kinds of adaptability often found in nature.

Adaptable architecture is becoming an increasingly viable endeavor as a result of recent developments in building technologies and materials. Masters research students Ece Tankal, Efilena Baseta and Ramin Shambayati at the Institute for Advanced Architecture of Catalonia were interested in “architecture of transition” and have developed a new material system that utilizes a thermally responsive polymer as structural joints with their project, "Translated Geometries." Read on after the break to learn about how this new material system was developed and its potential for applications in architecture. 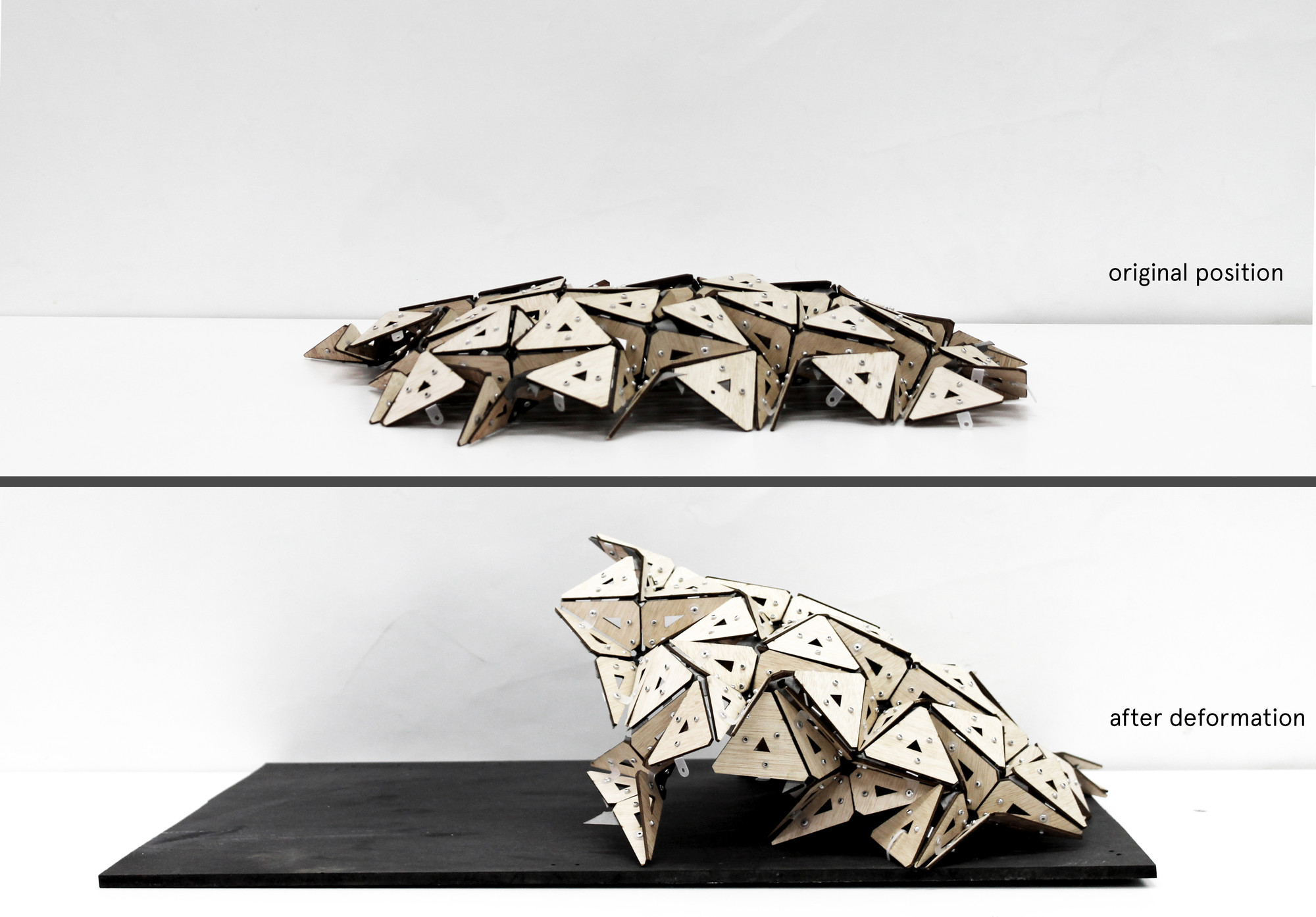 Recent research in the areas of adaptive architecture has included the use of 3D printing, smart materials, and even biological innovations such as animal printheads. One common material that has yet to be fully explored for adaptive structural purposes in architecture is plastic. In the development of their material system prototype, IaaC researchers have worked with Shape Memory Polymers (SMP) to create a mock-up of a structure that can transform itself by utilizing the unique characteristics of the material.

This particular material can change phase as a result of controlled external stimuli or more specifically, a change in temperature to heat the material above 60-70 degrees Celsius. Upon reheating, the material returns to its initial static state. One can imagine how this material could be particularly useful for creating new types of moveable joints - which until now have remained fairly limited to traditional materials such as metal - and this investigation of the material for its potential as a ­hinge is exactly how IaaC researches began the study for their first prototype.

To best take advantage of the material’s properties, the team needed to find a geometry that could be transported to a site in a state of repose, and then have the ability to deform or expand into the desired form. Foldable structures were an optimal solution for these purposes and origami patterns by mathematician and origami pioneer Ron Resch became a key precedent for the project. After extensive experimentation, they settled on a triangulated tessellation design, which enabled a flexible and portable form to be developed. ­

Two prototypes were subsequently developed at different scales, utilizing various techniques for activating the movement of the structure. The first prototype at 1:3 scale was composed of SMP cut into hexagonal shapes and placed at the nodes of the pattern. Apart from these nodes, other folds used simple hinges that allowed the entire form to move in sequence with the SMP joints. The resulting structure can be deformed by heating theses joints and inflating balloons underneath the structure, a technique which is already used in the creation of full-scale buildings such as binishell domes, and has proven to be a viable process for efficient construction. If these structural joints could be developed at the scale of a building, they would be particularly useful for modular structures that need to be transported in a completed state and rapidly constructed on site.

The second prototype employs a wedge system to further control movement of the SMP joints and a parallel circuit system to control the heat applied to specific joints. This system takes under three minutes to bring the SMP joints to their rubbery glass transition state, deform the structure as desired, and cool within two minutes to hold the new shape. The team envisions another variation in which each triangulated component could be a self-contained unit, housing a battery and a wireless microcontroller. Solar fabric panels attached to the surface of the structure could power the entire system and create a self-sustaining structure that could be controlled remotely.

The actual deformations of the form were achieved through the pulling force of octocopter drones. These drones act as a “mobile scaffolding system" and can be controlled by humans or respond to environmental factors to communicate with the microcontroller of each unit.

These transformable structures have the potential to open further possibilities in the realms of responsive environments. A similar system might be designed to respond to a given environment and improve the experience of occupants, such as providing increased shade if it is sunny, or folding open if it is cloudy. The adaptability of the structure also allow for various spatial configurations to fit different programmatic needs. These foldable structures coupled with the material advantages of Shape Memory Polymers have the potential to create transportable structures and architecture that immediately responds to our changing needs.