Andrés Jaque is an architect, academic director, and author, who founded the international architecture firm Office for Political Innovation in 2003. Award-winning OFFPOLINN is based in New York and Madrid, and works on projects of different scales and media, intersecting design, research, and critical environmental practices. In parallel to his career as an architect, Jaque is the director of the Advanced Architectural Design Program at Columbia University Graduate School of Architecture, Planning and Preservation, and a visiting professor at Princeton University and The Cooper Union. The architect is acknowledged for his transectional approach to architectural design, "practicing architecture as the intervention on complex composites of relationships, where its agency is negotiated with the agency unfold by other entities".

Following are the videos and selected quotes from Andrés Jaque's interview

Andrés Jaque describes his early experiences in architecture, political influences, and discovering his interests in the field.

Past, Present, Future - PAST. Interview with Andrés Jaque from Itinerant Office on Vimeo.

GIANPIERO VENTURINI: What are the most important moments you would like to share when you think about the first years of your career?

ANDRÉS JAQUE: “ I had the opportunity to do research and to live in Germany for two years and then I decided I was very interested in Heinrich Tessenow and I decided to live and work in Dresden and to study Hellerau - the gartenstadt that he
designed there - and I found a very different way of reading architecture.(…) So confronting what Tessenow was doing at the beginning of the century, reinventing the society by transforming bodies and confronting that with the current situation of Germany at that time, which was struggling to deal with the past that was so difficult through architecture. I found it fascinating. And that fascination with this way of making architecture relevant in society made me think that when I started practising, I wanted to start exploring the political dimension of architecture. That was my beginning in architecture.”

The architect defines his architecture practice, design approach, and the urban context OFFPOLINN works in.

Past, Present, Future - PRESENT. Interview with Andrés Jaque from Itinerant Office on Vimeo.

GV: How would you define your practice?

AJ: “We belong to a model of practice that is very different from the ones of the 90s and 2000s, in a way that we are not a practice based on sensitivity or language - not at all. We are not finding a kind of sensitivity and then applying them and seeing what’s the next step of that language, like whether we’re doing this with plastic and then the next step… But neither are we an office that wants to be a big corporation. We understand that our world is a little bit more complex, it’s a bit more about gaining a voice, we are constructing a network of actors that are engaging with reality in a very responsible way. If I had to define what our practice is, I would say that it is how to articulate design with research, with activism. And this is crucial because none of the situations that we intervene in is given to us. Not only do we have to invent the project and find who are the stakeholders in that existing situation, but also who could support us in gaining a voice there, and in order to do that, we have to do research.”

Jaque explains the current architecture challenges and how architects can bring together different realms as we move into a non-human society.

Past, Present, Future - FUTURE. Interview with Andrés Jaque from Itinerant Office on Vimeo.

GV: What are the urgencies and key concepts that you are trying to explore?

PR: “There are two kinds of concepts - for me, there is a priority for the architectural questions I’m trying to do: How to design for inter-scalarity, how do we do things that can operate at different scales simultaneously. I think this is crucial because that’s the way conflicts we face are happening. They’re happening in the way the design of a kitchen is affecting the whole economy of a city or the way resources are used. So that’s one challenge because now in our discipline things are separated by scales - from industrial design to architectural design, to urban design, to urban planning, to territorial planning. The question of how to develop design practices that could cross and connect things that are happening in different domains is a crucial question of our generation, I would say. The second one is how to bring together different technological realms, how would we work simultaneously with social networks, social media for instance and at the same time design a teapot. How we could connect the design of an object with the design of a social milieu, I think it’s a crucial question for us as a generation too” 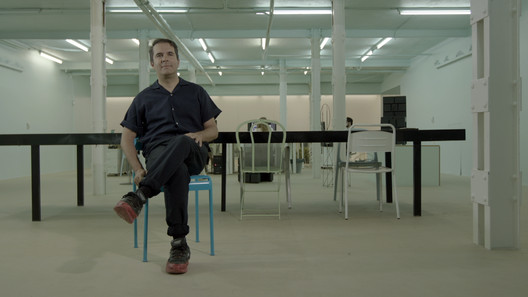