Save
Freek Persyn and the Power of Adaptation
Share
Or
Copy

The goal of the series is to research these successful firms and attempt to understand their methods and approaches. By hopefully of gaining a clearer picture of what it means to be an architect in the 21st century, the videos can also serve as inspiration for the next generation of up-and-coming architects and students as they enter the field.

When Freek Persyn co-founded the firm 51N4E immediately after finishing his education, the practice was able to grow organically due to Belgium’s dispersed client culture. From its beginning, 51N4E was unconstrained by the expectations of the industry, preferring instead to work on projects which asked interesting questions. Focusing on a hands-on, experiential approach, the firm’s interest in adaptability and transformation allows opportunities to rethink traditional architectural relationships and roles.

Following are the videos and selected quotes from Freek Persyn’s interview.

Freek Persyn describes the organic beginnings of his practice, key projects for the early development of the firm, and the value he discovered in retaining his innocence and naivete.

GIANPIERO VENTURINI: Which have been the main themes or interests in your office?

FREEK PERSYN: “I think the interests - apart from how you shape and realise them, which has changed a lot - have always been the same. The real interest has always been the same. It related very much with the statement by Margaret Thatcher who said, «There’s no such thing as a society.» I think from the very beginning, we have been extremely convinced that there is such a thing as society. And for us, architecture is interesting if you design for that society, for how you can live together. And so we have been always interested in that question - back then - and still today”

Persyn discusses the firm’s approach to choosing projects with unique parameters and opportunities, including the example of 51N4E’s current location in an existing office tower in an underutilized business district.

FP: “ It’s clear that we approach architecture from an idea of built environment, and not from an idea of products. So, it’s not that you have a question, and then we make the product that matches that questions. We think, in a sense, in a more contextual way. But also, context is not about fitting in it, but more about reshaping it. And I think that this idea is something which we encounter all of the time - that we live in an inherited environment, we want to change that environment, we want to change how we live in it, and so we have to work both on these new practices and these new environments”

Persyn’s view of the future focuses on transformation, experiences, and the relational role of the architect.

GV: Which are the key-words that you think should guide architecture in the future?

FP: “ We think transformation is very interesting, because a transformed building is always a building that is unadapted. And this lack of adaptation brings a lot of possibilities to find new ways to define how things relate to each other. It’s not written out first, and then built. But it’s like reshaping something and finding new opportunities in that.” 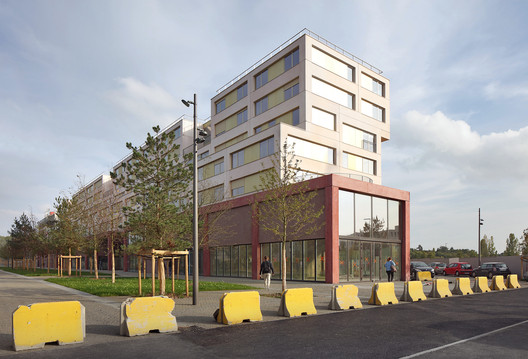