Odile Decq began her architecture practice, Studio Odile Decq, immediately upon graduation amidst sexism and doubt surrounding whether women could or should be architects in their own right, a doubt she’d in fact wanted to dispel since childhood. Today, she encourages those who work with her to be well-rounded and wants to instill in them a desire to do anything and everything. Decq has high hopes for future generations of architects that they can create something entirely new and reinvent the field from where it stands today.

Following are the videos and selected quotes from Odile Decq’s interview.

Odile Decq speaks about her dissatisfaction with her architectural education, getting her start in her own practice after graduation, and the sexism and prejudices she has faced along the way.

Past, Present, Future - PAST. Interview with Odile Decq from Itinerant Office on Vimeo.

GIANPIERO VENTURINI: Which were the reasons why you decided to study architecture?

“ (...) my father’s friend said to my parents: «You know, this is very nice and very convenient that young women now want to start studying architecture, because they are more pragmatic than us - the men - and they will be very efficient to work in our office - the office of men - working on the cupboard and the kitchen.» So I was thinking, my God, I’m recognised to be pragmatic, so maybe I can apply that and show that I can be very good at building, in the way I can build. So that was what I wanted to prove in the beginning and that I could do it.”

Decq describes the type of people she likes to work with as well as what she finds most compelling about practicing architecture and why she thinks it’s important today.

Past, Present, Future - PRESENT. Interview with Odile Decq from Itinerant Office on Vimeo.

GV: Which kind of topics are you into or trying to research today?

OD: “For me, architecture is an adventure. It has to be a place where people can move, live in good conditions, forget the hardness of the life outside, so it has to have a kind of humanistic approach, whatever the project is - a museum, housing, offices, whatever- so it always has to have something in addition to the functional programme to provide people with something which is better and more comfortable.”

Decq sees the future as full of opportunities for upcoming generations of architects and describes how she views the cycles of the profession and the opportunities to break that cycle.

Past, Present, Future - FUTURE. Interview with Odile Decq from Itinerant Office on Vimeo.

GV: What advice would you give to the new generations of architects?

OD: “(...) the world doesn’t need - maybe anymore - architects who only do plans or build buildings, because the machines and the robots will do that better than us. So what will remain for the people educated in architecture is the way to think and to rethink the organisation of the world and the organisation of society, the organisation of people’s lives. (...) I always tell my students that they have the opportunity to dream a century, to dream their time, the time of their lives, because they will have the opportunity to reinvent, to reinvent and to do it. So I have no advice to tell them except: dream and do.” 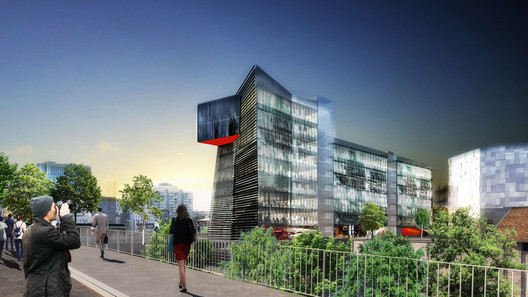