As the world recognizes Earth Day 2019, the public discourse is increasingly dominated by citizen action across the world manifesting a widespread fear and frustration at a perceived lack of action by governments and officials to confront the issue forthrightly. From the Extinction Rebellion protests that have gripped London, to school student strikes across 125 countries, global cities are increasingly finding themselves on the front line of a battle to limit the effects of global warming.

To this end, the architectural community has taken major steps in the past 12 months to generate design-led solutions which tackle climate change. From ecoLogicStudio’s bio-digital curtain to Bjarke Ingel’s floating city, the architecture world has speculated on issues across the global/local, and macro/micro spectrum.

In the United States too, there is evidence that climate change is finally moving to the forefront of design, with initiatives such as the AIA’s toolkit for tackling the issue. The past 12 months have also seen plans made by some of the United States’ most populous cities to protect themselves against rising sea levels, and unpredictable weather events. Below, we outline three such cities that we have reported on in the past 12 months.

Late last year, the Mayor of Boston and SCAPE Landscape Architecture collaborated on a vision to protect the city’s 47 miles of shoreline against climate change. The scheme lays out strategies which will “increase access and open space along the waterfront while better protecting the city during a major flooding event.”

One year after the launch of Resilient by Design's Bay Area Challenge, organizers led by TLS Landscape presented the final nine design concepts to protect San Francisco from the consequences of climate change. The Bay Area Challenge launched with a call to action to "bring together local residents, community organizations, public officials and local, national, and international experts to develop innovative solutions that will strengthen our region's resilience to sea level rise, severe storms, flooding, and earthquakes."

The idea formulated as a “blueprint for resilience” that can be replicated and utilized locally and globally. Other urban challenges will also be addressed, including housing, transport, health and economic disparity as a means of not just protecting the current regions, but strengthening them. The elite, collaborative teams include world-renowned designers like BIG, Mithun, and HASSELL+. 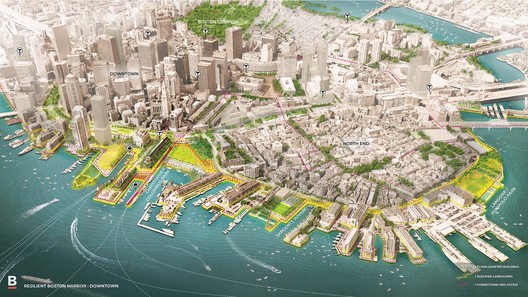