Sidewalk Labs has released new renderings from Snøhetta and Heatherwick Studio of the Quayside neighborhood development in Toronto. After announcing plans to create a model smart city, Sidewalk Labs has been working to pioneer a new approach to future urban developments. Plans for Quayside were first revealed last summer, designed to be interconnected smart neighborhood for the city. The latest renderings were released with further documents outlining how the company plans to pay for the ground-up development. 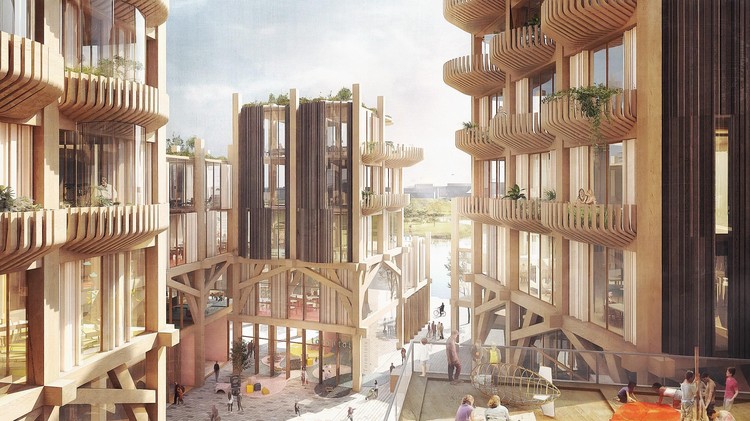 As the subsidiary of Google's parent company Alphabet, Sidewalk Labs released a progress report before the finalization of its draft Master Innovation and Development Plan. The team has announced that they would build a tall-timber factory in Ontario to meet the demand for timber that the new project would require. The design aims to "unlock the potential" of the Eastern Waterfront through new jobs and housing, as well as stimulating economic growth. The project would include 12 timber towers with 2,500 residential units total, 1,000 of which would be rented at below-market rates. Michael Green Architecture has developed a mass timber kit-of-parts, and Snøhetta and Heatherwick Studio have designed parts of the campus, innovation zone, and common areas.

Combining offices, shops and residences, Quayside would include a mix of programs. The new renders show high-rise wooden structures created with repeating frames. The structures would be built from modular kit of parts that could be adapted throughout the neighborhood. "We've dedicated the bottom floors of our buildings to a porous, flexible program we call Stoa that is accessible to everyone," said the team. The Stoa would function as year-round spaces wrapped in transparent and movable facades.

Quayside plans are currently being reviewed by the public for further feedback. The entire presentation can be viewed here. 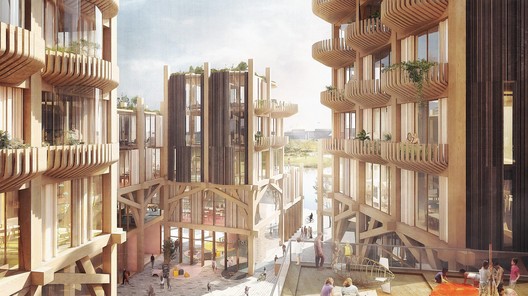