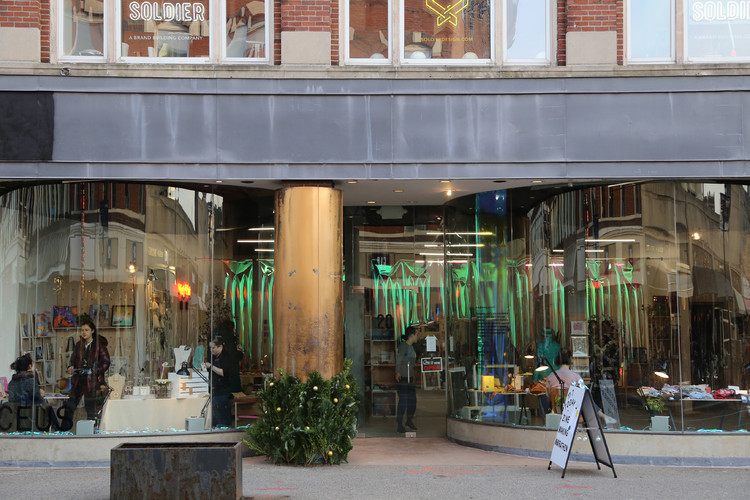 Located at 11 First Street in East Cambridge, the new location is the fourth in a series that has thus far seen locations as notable as Faneuil Hall, Roslindale, and Harvard Square. Previously a Finagle-a-Bagel, the new location features a hybrid workspace, event space, and gallery where visitors can meet the artists in residence and have the opportunity to view and purchase original art pieces. The space will once again welcome crowds as the space hosts onsite lectures, workshops, and events led by local artists and makers - though bagel availability is now up to the visitor.

Spaceus’ goal is to empower artists’ creativity as well as connect them with the local community. The community is likewise empowered with newfound accessibility to art and opportunities to engage in the artistic process. Since opening their first location last year, Spaceus' pop-up storefronts have welcomed over 30,000 visitors and hosted hundreds of events. The panoply of activities has thus far included calligraphy and figure drawing classes, movie screenings and panel discussions, and even zine-making marathons and giant inflatable installations. The opening of the new space on 2 February was a full day celebrating community and creativity with local artists creating and showcasing their work.

“We see vacant storefronts as underutilized assets,” said Stephanie Lee, co-founder of Spaceus. “We’ve seen that they can be transformed into places for communities to form and for artists to make within the heart of the city.”

The initial frustration of Spaceus’ founders - and their subsequent action - is a perfect example of local action generating sustainable growth. Vacant shopfronts have been transformed into prominent focal points for art, culture, and community. Spaceus identifies, designs, and programs storefronts to give artists a space to create while immersed and engaged in the city. It may not be a solution for everywhere, but in Boston, it certainly seems to be working.