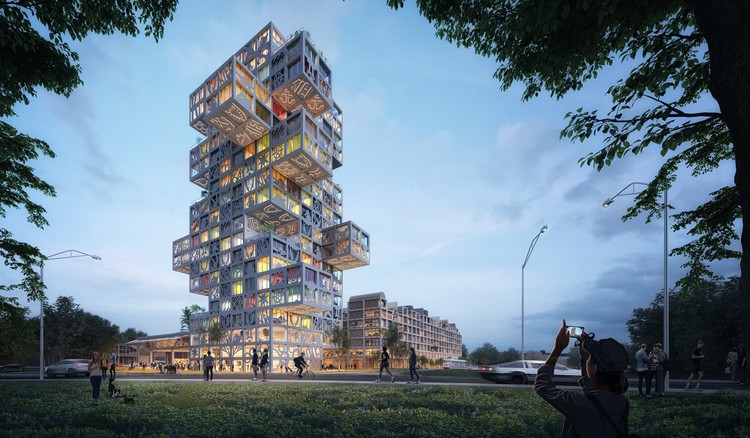 The existing structure, now named the "W8 Medienzentrum," will be converted into commercial units topped with apartments, where it will sit alongside a new building. This cubic addition, sitting atop a zig-zagging plinth of offices and shops, will contain several blocks of housing, and a tower of office spaces. At one end of the site, a 250-room hotel tower will connect to the plinth through a public event space used to host community-organized events and exhibitions.

The scheme places a heavy emphasis on “lively exterior spaces” with a courtyard between the buildings filled with a variety of street furniture, and a rooftop parking winding around the three cubic housing blocks. The scheme’s façade panels, made from fiber-reinforced concrete, have been designed to display a variety of icons inspired by local creative output, activated by interior lighting.

By considering the design as a flexible system, rather than a fixed concept, the scheme allows many opportunities for community input. The cubic arrangement of the scheme means its final construction may fall anywhere along a range of options, "from a conservative series of boxes to a wacky yet charismatic collection of cantilevers and iconography.” The final size and number of cantilevers on the hotel tower are still open for change, as is the extent of pictographic panels, and size, number, and layout of apartments in the existing building.

In a location with such a dynamic and creative existing community, it’s obvious that the community should have a say in this development. KoolKiel is not only inspired by them, but it also allows them to tailor the proposal to their wishes—we’re presenting them with not just a design, but also a question: ‘how ‘Kool’ do you want it?’
-Jacob van Rijs, Principal and Cofounder, MVRDV

The scheme is only one of MVRDV’s explorations into responsive. Earlier this month, the Rotterdam-based firm released images of their dual towers in Taipei, adorned with interactive media facades. Last year, the firm also unveiled their winning design for a SeaSaw in the Dutch coastal city of Den Helder, which rocks back and forth in response to the changing tide.

Winy Maas at Living Environment: "There Are Four Important Points for the Development of Contemporary Housing"

With a presentation by Dutch architect Winy Maas ( MVRDV), the third edition of "Living Environment," organized by Russian Ministry of Construction Industry, Housing and Utilities Sector, DOM.RF and Strelka Institute for Media, Architecture and Design, was inaugurated today in the city of Kaliningrad, Russia. 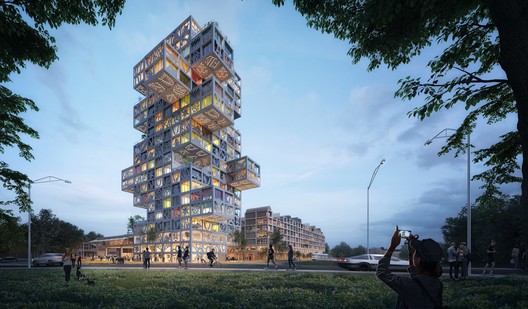