MVRDV has won a competition for the design of an art installation in the Dutch coastal city of Den Helder, seeking to strengthen the connection between land and sea through a new public landmark. The “SeaSaw” consists of a viewing platform balanced in equilibrium atop the city’s flood defenses, a distinguishable structure praised by the jury for capturing “the energetic spirit of the city represented as an infinite form.” 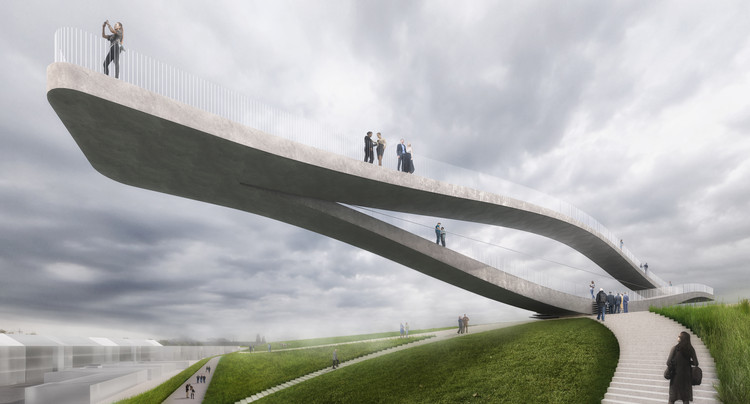 Like many Dutch coastal cities, Den Helder hosts a remarkable flood defense system of dikes: artificial mounds and ditches along the coast designed to protect Holland’s reclaimed land from the sea. Recent reinforcement of the Den Helder dike has resulted in a division between the city and its coastline, a lost connection that MVRDV seeks to re-establish, while also giving Den Helder the distinctive landmark it currently lacks.

SeaSaw rediscovers this connection by creating a viewing platform balanced on top of the coastal mound currently blocking views between the city and coast. The infinitely-looping platform re-establishes these views, embodied in a landmark matching the identity of Den Helder: tough and energetic. The connection between land and sea is reinforced by the tidal influence on SeaSaw, with the platform gently rocking back and forth in response to the changing sea level.

The platform will form a node for a proposed 3-mile-long (5-kilometer-long) walking and cycling path along the dike, integrating the system with both the city and coast while simultaneously activating the seafront.

The SeaSaw for Den Helder is a memorable, undulating public art installation which responds to its context and history, whilst literally representing the dynamics of the sea in its infinite movement. The installation respects the existing dike whilst allowing visitors and inhabitants to experience both city and sea from a whole new perspective.
-Jacob van Rijs, co-founder, MVRDV

For the scheme’s development, MVRDV worked in collaboration with IMD engineers. Completion of the SeaSaw is set for 2019. 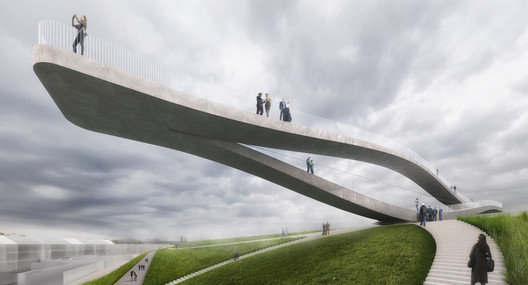