Swedish studio Urban Nouveau created a plan to save Stockholm's Gamla Lidingöbron bridge by transforming it into a linear park and housing. After launching a petition to save the bridge and re-purpose it, ArchDaily followed up with Sara Göransson, founding partner at Urban Nouveau, to ask her about her background and how the studio approaches social integration, housing and the future of urban infrastructure. 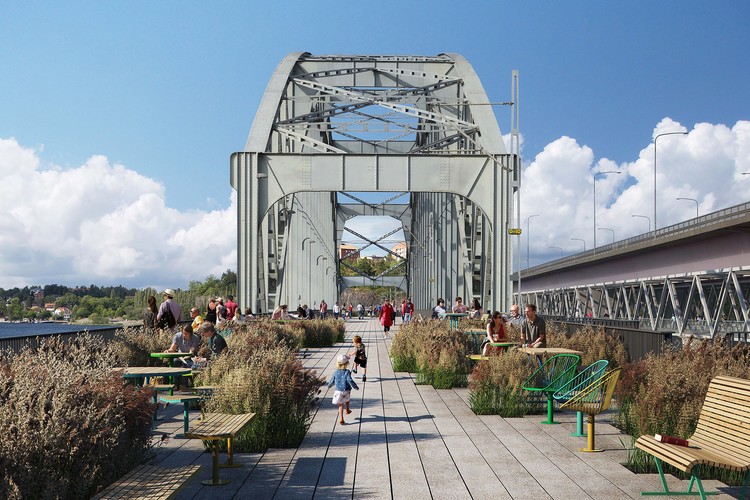 What inspired you to study architecture?

Sara: I am from a beautiful country region in the north of Sweden. But due to urbanization, what was once a thriving community based around forestry and farming has become a depopulated region with many beautiful old houses and farms standing abandoned. Driving through this landscape and seeing these precious houses left to decay is what inspired me to study building engineering. I saw it as a means to take care of and restore these buildings. This initial inspiration of respecting the existing context has remained a core value for me as an architect and urban developer.

Sara: Stockholm is one of the fastest growing cities in Europe and there is an enormous opportunity to change the city's reputation as being one of the most segregated cities in the world. Urban development in Stockholm has been and still is planned and delivered as urban islands, often disconnected from each other. Urban Nouveau has developed a regional strategy, Connecting-Stockholm, designed to heal the city by framing future growth onto "bridge villages". These villages are new neighborhoods where the housing, services, commerce and so on are specifically designed to build connections between existing, and currently segregated, suburbs. We have mapped 1000 possible bridge villages in the region and when our project is implemented Stockholm could become known for being one of the most integrated cities in the world.

Why did you start Urban Nouveau?

Sara: When we started working on the incremental housing strategy in India in 2008, Filipe and I started to wonder if it would be possible to create an urban development company that would work in both formal and informal contexts, connecting the city and the countryside, serving both rich and poor. Being inspired by the Art Nouveau movement that 100 years ago defended a new consciousness of nature as its core concept, we felt it was the perfect reference for a company wanting to create a new urbanity.

Your work takes a holistic look at urban environments and society across many different cities. How do you think lessons from global cities can inform your work in Stockholm?

Sara: We are bringing the lessons we have learned from the urban villages of India, Brazil, Japan and Portugal into the projects we are developing in Stockholm. These lessons of density, diversity, community, spontaneity and creativity have their own code of implementation in urbanity. We use these lessons to alleviate problems we are facing in the Swedish context such as loneliness, segregation, repetition and a preference for the generic.

You’ve stated that Stockholm is a scattered city. How do projects like the Lidingö Bridge Village help create connection and new opportunities for a city?

Sara: The Lidingö Bridge Village project saves a beautiful, historic bridge called Gamla Lidingöbron from demolition. We have designed a concept that features 50 apartments within the structure of the bridge. With the sales of these apartments, UrbanNouveau will finance the complete renovation and strengthening of the bridge, saving a local icon. We’ve also designed a public park on top of the bridge that will become a social and green connection between Stockholm and the island of Lidingö, open for all. We believe an innovative project like this bridge village and park can also attract more tourists to Stockholm, adding income to the local economy.

Do you believe that cities can adapt your model for the Lidingö Bridge for similar projects around the world?

Sara: Definitely. After the project was published internationally we received requests from citizens of Prague to help save the city's Vyton bridge from demolition, as well as from Hamburg, wanting our support to preserve the historic Freihafen-Elbbrücke Each bridge is unique and needs to be treated as such when it comes to developing a suitable solution for the future. But steel bridges can last forever if they are maintained properly and it is always a bad choice to demolish them when there are ways to bring a new life to these majestic icons. Urban Nouveau would be very happy to work on other bridge projects around the world.

Architects constantly face questions of narrowing project scopes. How do you think architects and designers will adapt ways of practicing to advance the design professions over the coming decades?

Sara: I think taking charge of the full process is the way forward for architects and designers. We have understood that as architects and urban designers our role is limited when it comes to implementing our visions in the way they were intended. Therefore, we have evolved our role into becoming developers as well. In this way, we can make sure that the core values of a project are implemented without compromises.