Swedish studio Urban Nouveau has created a plan to save Stockholm's Gamla Lidingöbron bridge by transforming it into a linear park and housing. Built in the 1920s, the rail and pedestrian bridge features a lattice structure and arched steel trusses that would frame 50 new apartments and a pedestrian park above. While the local council has made plans to demolish the Lidingö bridge, Urban Nouveau launched a petition with the aim of saving the bridge and re-purposing it for the city. 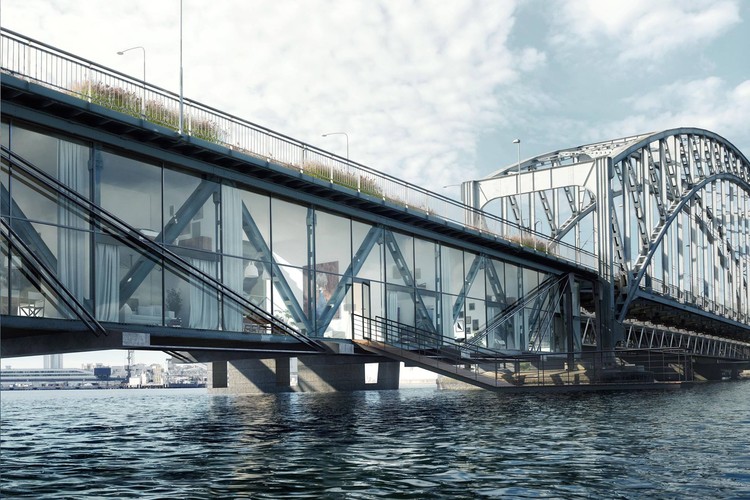 As a connector between Stockholm and the island of Lidingö, the design would include turning the existing bridge deck into a pedestrian park and creating 50 premium west facing apartments inside the structure of the bridge. The apartments would feature double-height living spaces and glazed facades on both sides. Urban Nouveau believes the sale of the apartments would fund the restoration of the existing bridge. In a similar spirit as Manhattan's High Line, the proposal would create a social and ecological pedestrian connection while also resolving tram and cycle lanes.

As Urban Nouveau states, "When we first lived in Stockholm our route to work and study took us across the bridge each day. We walked the bridge more than 500 times each year and fell in love with its striking steel arch, its tranquil waterside location and beautiful west facing views. Our love and architectural understanding of the bridge has inspired us to come up with a proposal for saving the Old Lidingö Bridge from demolition."

The local council plans aims to start building a new bridge in 2019 and demolish the Lidingö bridge in 2022. Urban Nouveau hopes their petition and increased media attention will create a larger discussion about restoration of the bridge and Stockholm's future. They argue that the bridge contains public memory that should not be erased, as their plan to repurpose the structure would allow it to take on a new life as a symbol of Stockholm. 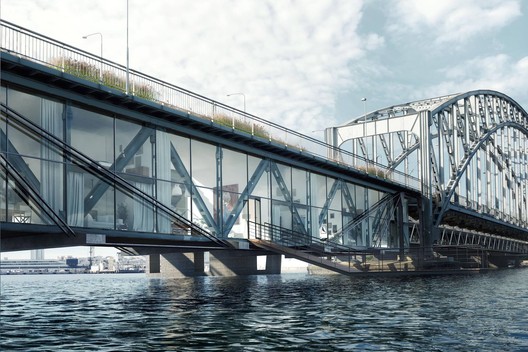