Stacked 33 floors tall, the series of terraced concrete boxes provide 35,000 square meters of floor space. Each box rotates to form apartment units with balconies along both north and south facades, providing extensive views and a sense of openness.

The scheme of stepped terraces opens up to create a public plaza at the base of the building, with plans to house the retail space and allow residents to rest in the shade or access the building lobbies. Continuing the terracing at the roof level, the lap pool amidst the steps offers views overlooking the city.

With the aim to engage the nearby La Carolina park, each terrace features a different species of a tree native to Ecuador that once outgrown, can be replanted in the city. "The entire facade of the project becomes a vertical display of the biodiversity of Quito," said a statement from BIG. "The building becomes part of a green cycle - from park to building back to park."

Enabled by the installation of a hollow wall underneath each balcony, the urban tree farm uses this mechanism to hold down the roots of the trees. Inside the unit, the planters serve as concrete sculptures which become the root zone for the trees in the apartments above.

Unlike typical green architecture, the proposal reinvents the vertical garden to allow La Carolina to "climb up and into the building," encapsulating the holistic experience of Quito into a single structure. 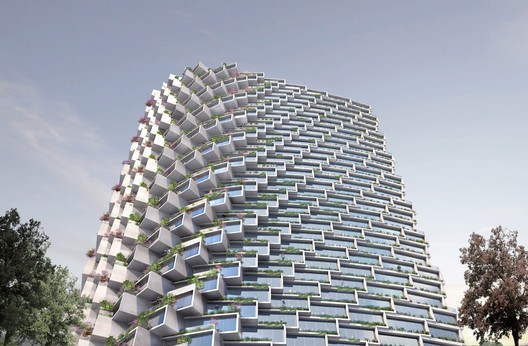