New renders have been released of Henning Larsen’s “luxurious hideaway in the Georgian mountains” after construction started on the 25000m², 135 room hotel earlier this year. The new Agobili Hotel is located at the Abastumani spa resort in Georgia, which itself has been a health retreat for both the Tsar family and general public alike. The new building hopes “to create a story about the magnificent place it inhabits.” 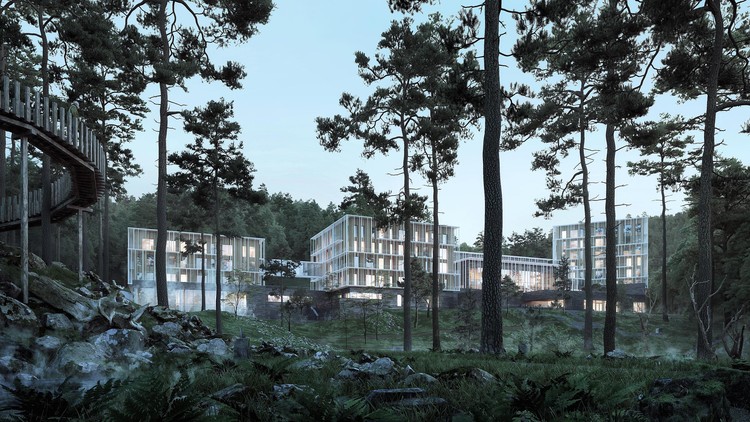 Drawing from both the heritage and breathtaking landscapes of the Otskhe River Valley, the distinctly Scandinavian design brings “a new sense of life and wellness into the lush forest landscape”.

The combination of honoring history and nature at the same time is very important for the region. And, for Georgia as a whole, the hotel sets new standards for the tourism economy. We are proud to realize this design, which will give tourists a truly unique experience and make them curious to go exploring the country further.
- Werner Frosch, Partner at Henning Larsen

The project is split into two parts. The base, acting as a solid plinth for the scheme, houses the public functions of the building, seamlessly melting into the surrounding landscape. The private rooms, in contrast, sit overtly upon the plinth, their timber cubed forms offering exceptional views of the surrounding woodland.

In order to blur the boundary with the outside, a dark stone is extensively used within the public interior of the new Agobili Hotel. The project’s materiality hopes to grow with the context, gradually integrating with the natural landscape, and each material selected supports the scheme's sustainable strategy. When coupled with the flowing, expansive plan, the project begins to take on cave-like qualities, where “at every corner, visitors are allured to discover different destinations at different levels.”

After winning the competition in 2011, construction began in 2018 and is due to finish in 2020. The newly released renders show an update on the initial design. 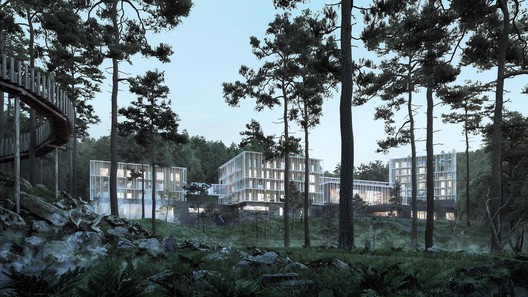