In his ongoing study, Nikola Olic - a Serbian photographer based in Dallas, Texas - focuses on “architectural photography and abstract structural quotes that reimagine their subjects in playful, dimensionless and disorienting ways.” Often isolating elements of a facade, which obscures the viewer's sense of scale and perspective, Olic provides short descriptions of each image, acting as a “demystifying tool” and reminding us of the everyday nature of his subject matter. In the third collection shared with ArchDaily, the photographs are taken in Dallas, Fort Worth, Las Vegas, New York, Los Angeles, Long Beach, and Hong Kong. 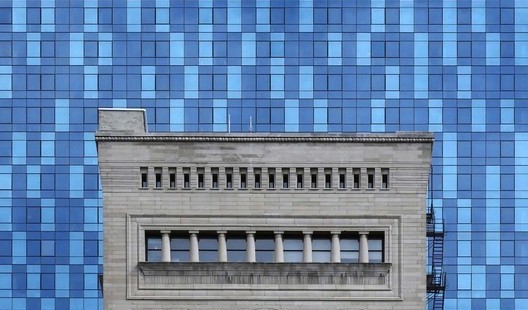 Clash of architectural styles, materials and angles, combining different buildings and different city blocks into a single architectural compilation, a saturated and playfully disorienting visual space appropriate for a city that can be described in similar ways.

In a city known for fast luck, bright lights and high stakes, architecture can both match it and contrast it with this cold soothing visual vortex that appeared on the side of a building.

The completely saturated visual space of two buildings of the Wynn Hotel in Las Vegas clashing against each other into a stable central column reminds of a half-melted chocolate bar offering a tasty break from high-stakes stress in the gambling capital of the world.

Picking and choosing the exact square pegs and round wholes of architecture, space and materials, isolating and focusing on two parts of the same building.

The Chrysler Building and the United Nations building are about half a mile apart, connected by New York City's 42nd Street, and also by a zoom lens from western edge of Queens.

Chicago invented the skyscraper, so things that go up -- buildings, windows, curtains -- fit right in. this view is from the art institute of Chicago, a place full of interesting designs and visuals both inside and outside.

The Sik Sik Yuen Wong Tai Sin Temple in Hong Kong gives another reminder of how a bustling city of 7 million people can become tranquil and mute within seconds of walking inside a temple, with its gray walls and tiles effortlessly blending with surround high-rises, posing the question how millions of people quickly flow in and out of these giant monotone structures.

The museum tower in downtown Dallas was a crucial architectural addition intended to solidify the urban core of the city in proximity to a strong arts community, placing the tower close to both the Nasher Sculpture Center and the Klyde Warren Park, whose reflective stage covering provided an interesting geometric and colorful addition to the elegant facade of the museum tower a few blocks behind.

Texas hospitality meets Texas sun, as the shadow from an art deco figure at fair park in Dallas appears to high five a neighboring bush.

Building with Steps / Fort Worth, Texas

The tallest building in Fort Worth, Texas, this simple brutalist architectural design is a unique addition to the vibrant and growing downtown landscape, with a strong, repetitive pattern of windows being interrupted by meticulous, powerful vertical lines. it is the first and the last building you see when driving past this charming Texas town. It also serves as a prominent symbol of both economic and urban activity in the surrounding downtown area, with the interesting Jonathan Borofsky aluminum sculpture placed near.

Massive white wings of Santiago Calatrava's oculus structure play a part in the somber balance of light and shadow, sky and structure, old and new, heavy and light, at the ground zero memorial in NYC.

An important part of the beautiful west-side view of New York City is Frank Gehry's glass-heavy IAC building. It is his first design completely covered in glass, using a method that cleverly obscures the divisions between floors, with 1349 unique panels imported from Italy. Lined up behind it across 19th street which separates the two buildings is another glass-heavy building perfectly complementing the saturated visual space of the two structures as viewed from the narrow sidewalk alongside the busy and loud 11th avenue.

Getty Museum is at once a part of Los Angeles, but also completely separate from it. That is not by accident, visitors are given a slow trolley ride up a hill, never hinting at the museum details that await. The slow ride is worth the wait and the anticipation. Once on top of the hill, the Getty Museum reveals to be many museums in one, combined by an earth-inspired architecture and facade that give the museum a solid and permanent feeling. it looks over Los Angeles, competing for attention with famous letters on that other Hollywood Hill.

Crucial part of the new roof over the Arthur Ashe stadium at flushing meadows are wide, long and bright blue support beams, intertwined through the upper section of the stadium.

Subway stop ceiling at a station in lower Manhattan, offering a welcome surprise and a great start for eager passengers and tourists walking up to the New York City surface.

An unusually angled roof on a corporate building in downtown Dallas is completely flattened into an unexpected shape when standing in one precise location in the park across the street.

The revitalized downtown area in Dallas is centered around the inventive Klyde Warren Park and the surrounding buildings. Many, like this corporate building for hunt oil, feature attractive lighting and video capabilities, which are used to display messages and images on its facade. The best part, however, might be on the side of the building, where a curious change in geometry and angle changes the very nature of the building, into something unexpected and, at times, hard to visually accept when casually passing by.

Crisp blue summer Chicago sky was replaced with a crisp blue facade of a modern high-rise a few blocks west of millennium park, giving a pause and a delayed pleasure in studying their combination.

Viewing architecture from inside other architecture creates new visual opportunities, even while turning your back to the new Petersen Automotive Museum in Los Angeles, which in itself is worth studying and exploring, its red flowing streaks adding even more fire to the vibrant cultural neighborhood.

The colorful Los Angeles downtown space is symbolically represented by a city hall building that stands out from its surroundings and its city, offering a nondescript visual grid as a well defined storage space in which the city keeps its satellite dishes and antennas, neatly aligned in the very middle.

See more of the series here.