Nikola Olic is an architectural photographer based in Dallas, Texas, with a focus on capturing and reimagining buildings and sculptural objects in "dimensionless and disorienting ways." His photographs, which often isolate views of building façades, frame architectural surfaces in order for them to appear to collapse into two dimensions. According to Olic, "this transience can be suspended by a camera shutter for a fraction of a second." As part of his process, each photograph is named before being given a short textual accompaniment.

See a selection of Olic's photographs after the break. 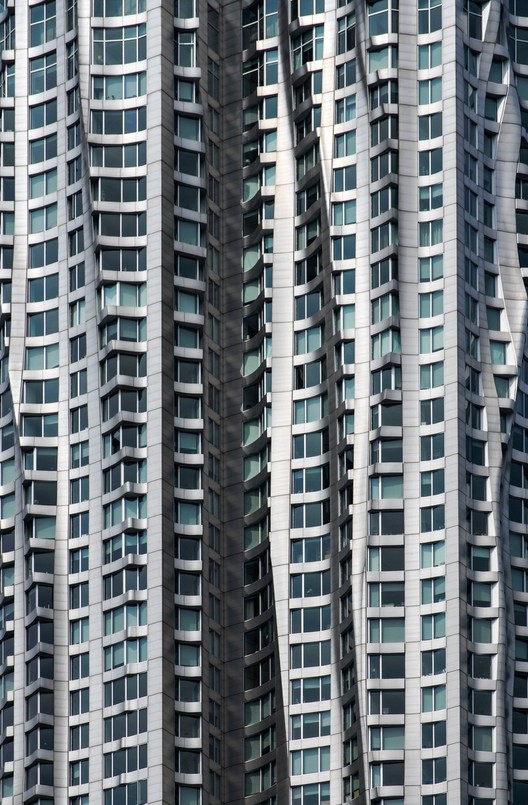 Striking Dallas architecture has its own set of twin buildings. They are not on par with the famous - or infamous - twins in New York City, or the Marina City buildings in Chicago, but they hold a central position in the urban spectrum of Dallas' architectural accomplishments. The distance between the two buildings provides space for light and shadows as quality additions to photographic composition and ideas, strikingly combined with the busy 1950's facades of both of these buildings.

As the tallest building in Fort Worth, Texas, this simple Brutalist architectural design is a unique addition to the vibrant and growing downtown landscape, with a strong, repetitive pattern of windows being interrupted by powerful vertical lines. It is the first and the last building you see when driving past this charming Texas town. It also serves as a prominent symbol of both economic and urban activity in the surrounding downtown area.

Resembling the mesh wire mockups that probably accompanied its early architectural design back in 1978, both the hotel and the famous adjacent Reunion Tower became a landmark duo that would visually define and dominate Dallas for decades to come. The angle used in the opening fly-over credits of the popular soap opera Dallas focused on the other side of the structure, leaving this complex, saturated, modernistic compilation of glassed shapes and reflective surfaces best visible from infamous Dealey plaza further north.

The main theme Thom Mayne was asked to explore with his design of the new Perot Museum in downtown Dallas was the representation of nature and flora found in the expansive state of Texas. Towards that goal the museum garden, roof and balconies hold various types of plant life in modern concrete enclosures, often providing striking angles and visual combinations when viewed from the streets around it. View from Broom Street provides a diagonal intersection between two levels, with barely visible grass in between.

A rare landmark that is most recognizable at night, this modern structure's edges are lined with high-powered light tubes that outline the unique shape and make it visible for miles down the many highways that intersect in its proximity in downtown Dallas. The complex saturated intersection of glass and steel adorn two of the four sides of the building, with this west-bound one providing the most captivating color pallets and sharp, warm angles.

The Lake Point Tower holds its own among various more famous buildings around it, with a unique curved shape that obscures and flattens its three actual sides down to seemingly two. This dark glass structure resembles a monochrome version of the opening scene from The Matrix movie, with flowing rectangles and unexpected reflections and gradients. It once held dual world records for both being the tallest apartment building yet shortest one to extend to seventy floors.

An important part of the beautiful westside view of New York City is Frank Gehry's glass-heavy IAC Building. It is his first design completely covered in glass, using a method that cleverly obscures the divisions between floors, with 1349 unique panels imported from Italy. Lined up behind it across 19th street which separates the two buildings is another glass-heavy building perfectly complementing the saturated visual space of the two structures as viewed from the narrow sidewalk alongside the busy and loud 11th Avenue.

Dallas residents that see this building daily are purposefully tricked - it is supposed to look differently from all four sides. Corner views provide little help as they provide more confusing and disorienting views. That was the basic premise of architect I.M. Pei when he designed the building in 1986: to use angles, triangles, planes and prisms to create a seemingly impossible visual space. Eastern view from Griffin Street flattens out one of those planes in a way that makes the structure seem broken and folded down the middle.

A rare building that is diagonal to the usual angles and regular intersections in the densely packed downtown Houston, its hypnotic lines roughly match some of the elevator shafts from inside the building, moving office workers and lawyers around since 1981. Adding to the mesmeric feeling to this architecture are the intense black and white lines, focusing on glass and aluminum in a city known for oil or concrete.

Borrowing from the very concept of mirrors, the Cloud Gate sculpture at Millennium Park in downtown Chicago can be explored and approached in infinite ways. The Bean, as it is colloquially known, can be photographically viewed from any angle, providing visitors full access around and under it, and allowing for creative combinations of light, sky, clouds and the city's reflection. Looking north-east towards it from Michigan Avenue, The Bean imagines what might be if the winds in the 'Windy City' were infinitely strong.