Save
From Romantic Ruins to the Ultra-Real: A History of the Architectural Render
Share
Or
Copy

Throughout history, architects have used sketches and paintings to display to their clients the potential outcomes of the projects rattling around their minds. Since Brunelleschi’s adoption of drawn perspective in 1415, architectural visualizations have painted hyper-realistic imaginings of an ideal, where the walls are always clean, the light always shines in the most perfect way, and the inhabitants are always happy.

With technological advances in 3D modeling and digital rendering, this ability to sell an idea through a snapshot of the perfect architectural experience has become almost unrestricted. Many have criticized the dangers of unrealistic renderings that exceed reality and how they can create the illusion of a perfect project when, in fact, it is far from being resolved. However, this is only the natural next step in a history of fantastical representations, where the render becomes a piece of art itself.

Below is a brief history of the interesting ways architects have chosen to depict their projects—from imagined time travel to the diagrammatic. 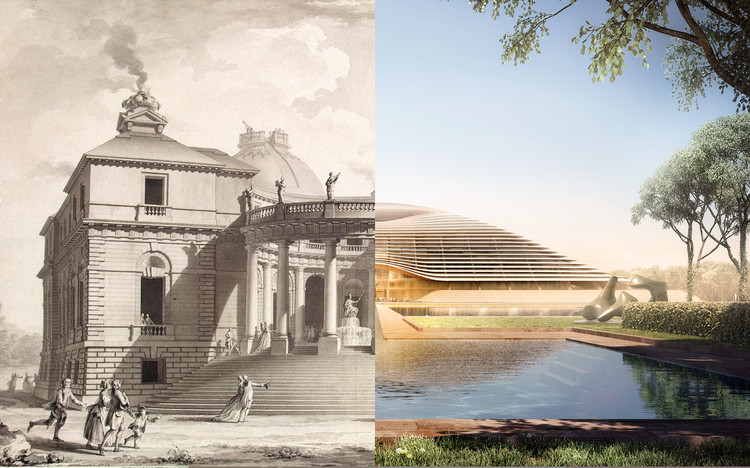 One of the most well-known instances of a visualization that deviates from realistic portrayal is Joseph Michael Gandy’s watercolor painting of John Soane’s Bank of England. Exhibited in the Royal Academy in 1830, the artwork is a cutaway axonometric that displays the building seemingly in ruins, centuries into the future. Inspired by Piranesi’s drawings of the ruins of ancient Rome, the visualization of the Bank was displayed with the quotation “I want to lift the roof of that wonderful national building. The interior will be revealed to you like a meat pie with the crust removed.” The quote, taken from Alain-René Lesage’s novel Le Diable Boiteux, describes the devil carrying the protagonist across the city rooftops to expose the life below. The artwork presents Soane’s project in the most flattering light possible, suggesting that it will be as monumental and enduring as the ruins of Rome.

For other architects such as Claude-Nicolas Ledoux and Étienne-Louis Boullée, their visualizations of unrealized projects are far more well-known than those actually constructed. The ongoing fascination and endurance of Boullée’s Cenotaph for Newton (1784) is a testament to the power of the drawing—the way the waning light shines in a perfect, fleeting arc across the surface, the immensity of the night sky captured within its cavernous interior, tiny ant-like people standing immobile within geometric perfection. All these details have captured the architectural imagination for centuries and reflect the influence of conceptual architecture through drawing alone.

While Ledoux is possibly most famous for his design of the Ideal City of Chaux, his drawing of his built Theatre of Besançon (1775) through the lens of an eye is another interesting example of architectural representation. He critiqued theatrical design at the time, where it was difficult to see or hear the stage properly, and planned his theatre around the idea of peasants on the street circling the center of the action. His visualization of the eye emphasizes the accessibility and grandeur of the stage through the perspective of each audience member, focusing on the individual’s experience.

In contrast, the Bauhaus in the 1920s moved away from visualizations based on the human perspective and instead mainly employed axonometric drawings. In 1923 the De Stijl exhibition was held featuring axonometric drawings in a similar style: representations abstracted into simply line, square and primary colors. The same year, Gropius declared that the Bauhaus would be discarding the old “academic perspective” in favor of the axonometric. This shift from visualizations at the human scale to axonometric drawings seen from above paralleled their design philosophy by shifting towards the idea of buildings as objects, as a “machine” to be dissected. The use of simple, diagrammatic line and color mirrored the minimalist and geometric forms of their architecture. The Bauhaus method of architectural representation hugely influenced the International Style and later Modernists such as Le Corbusier.

In the 1960s, radical groups were heavily influenced by popular culture and began using collage, photography and juxtapositions of images to create meaning in their representations. Archigram, arguably the most well-known of these groups, used montage, comic strips, and graphic text to convey their projects. Their style evoked a boisterous futuristic city where the familiar and unfamiliar merge. Another one of these radical groups was the Florence-based Superstudio whose concept ‘The Continuous Monument’ was envisaged as a “negative utopia” to warn against what they saw as architecture's potential future. Consisting of a huge white grid spread across the entire world—a blanket architecture enveloping the planet—it acted as a critique of globalization and the destruction of individuality and local culture. The use of popular media to display their projects created an architecture that was more accessible and exciting to the general public, which was relevant to their intention to use architecture as a tool for social and political critique.

In the 80s and 90s, deconstructivists such as Zaha Hadid and Peter Eisenman moved further away from realistic portrayals of their work by using the drawing as a means towards procedural design. Drawing their ideas from post-structuralist discourse in linguistics and philosophy, their drawings and architecture themselves questioned objectivity and the accepted architectural language. The use of abstraction in representation allowed for an interpretive approach to deciphering drawings. Zaha Hadid describing this as “moving away from certain dogmas about what architecture is.” Similarly, in Eisenman’s House series, he describes his drawings as the “real architecture” and the constructed houses as simply a medium through which the conceptual house becomes possible. The 2D architectural representation becomes the “real,” a work of architecture in itself.

Throughout history, the manner of representation in architectural visualizations has often greatly influenced the architecture created. In the contemporary world, the ease at which we can craft 3D forms and photo-realistic renders has a huge impact on the resulting constriction. Even architectural pedagogy focuses more and more on the graphic representation rather than the architecture itself. Although this is often blamed on current technology, it has only made it easier to do what architects have done since the very beginning: use illusion and interpretation to sell their designs and concepts. 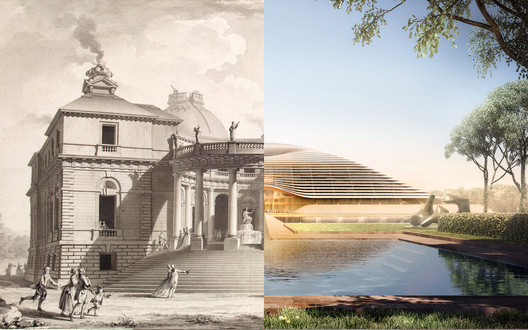