Located on 643 North Spring Street, the scheme will provide 300 apartments ranging from studios to three-bedroom units, and a 149-room hotel operated by MOB. Emphasizing the importance of community space and interaction, the residents and hotel guests will share a rooftop amenity deck with landscaped terraces on the second and third floor, as well as a gym, coworking spaces, rentable offices, pop-up stores, a rooftop swimming pool and bar, and space for outdoor cooking.

This project transforms a parking lot and commercial strip into an architecture that opens up the potential of the site to connect neighborhoods. Responding to the growing needs of the city, we designed the footprint to enable new generous outdoor public space at ground level while simultaneously creating a curved upper volume to capture views, light, and air for the building’s inhabitants.
-Jeanne Gang, Founding Principal, Studio Gang

The scheme will feature undulating concrete floor plates supporting high-performance glass walls, creating terraces with sweeping views of the city and mountains. With a width of only 55 feet, the scheme’s massing permits fresh air and sunlight for every unit, with set-back windows providing shade in the summer months.

A Site Plan Review package of the scheme has been submitted to the Los Angeles City Planning Department, with community meetings expected to take place in the coming months.

Studio Gang has released details of their proposed condominium tower in Downtown Brooklyn, New York City. "11 Hoyt" has been designed with an emphasis on nature and community-building, responding to a lack of comfortable outdoor space in Brooklyn through the creation of an "outdoor-indoor environment." 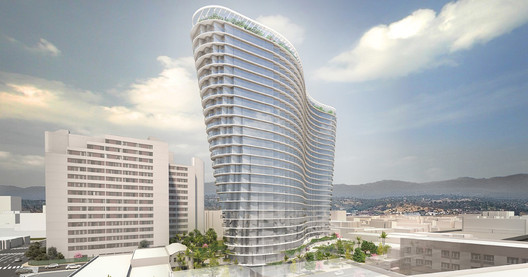