Studio Gang has released details of their proposed condominium tower in Downtown Brooklyn, New York City. “11 Hoyt” has been designed with an emphasis on nature and community-building, responding to a lack of comfortable outdoor space in Brooklyn through the creation of an “outdoor-indoor environment."

The Studio Gang scheme, designed in collaboration with Hill West Architects, reclaims a former parking garage site in a rapidly-densifying area, where the population has increased by 40% in twenty years. 11 Hoyt is set to transform the site into an elevated green podium anchored by a 770,000-square-foot (71,000-square-meter) residential tower featuring a “scalloped” façade.

The scheme’s green podium acts as a fifth façade for the building; an indoor-outdoor environment encouraging neighbors to meet and interact among trees and gardens. As the 620-foot-tall (190-meter-tall) scheme rises, the tower’s façade pushes out in plan to create expanded living spaces for the 490 residential units, arranged in 190 unique floor plans.

The tower’s eye-catching “scalloped” façade is to be built of precast concrete, prefabricated along with the residential units to be installed into the structural core on-site. As the façade projects outwards and inwards, it creates an inhabitable interior space with built-in window seats framing eight-foot-tall windows, offering views of the scheme’s rippled façade, the surrounding neighborhood, and the waterfront beyond. 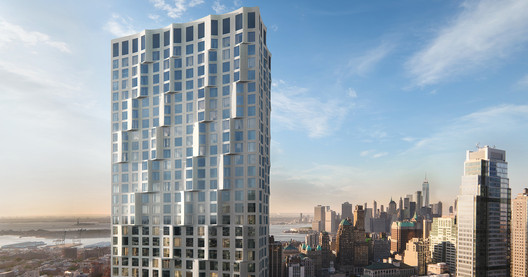