We were inspired by the Government of Brussels’ ambitions to tap into the spirit of the old industrial area by introducing ‘second generation industries’ - local production facilities such as e.g. microbreweries, a cookie factory, coffee roasting facilities. As architects involved in urban planning one of our most distinguished tasks is to create the physical framework for an area like Key West to regain economic growth and community cohesion.
-Jacob Kurek, Partner, Henning Larsen

The scheme will see the extension of Brussels' existing canal system through a new basin, making waterfront living more accessible to the 500,000 square feet (46,000 square meters) of new living accommodation. In an effort to improve water quality in the canal, rainwater collection and improvements to a local biotope will be undertaken, creating opportunities for water-based activities such as kayaking.

From Copenhagen Harbor we know how waterfronts are very powerful attractors when it comes to creating public life in a city. It gives an immense quality of life to feel a connection to nature in a city center. When you give people attractive places to meet a sense community is naturally strengthened.
-Jacob Kurek, Partner, Henning Larsen

The program for the new buildings sees ground floor space dedicated to public and retail functions to enhance street activity, while a large town square adjacent to the canal forms a central public space. Throughout the scheme, courtyards and rooftop urban farms will offer spaces for relaxation, while the new central square offers space for selling final produce, tying a loop from earth to table. The residential space for Key West is to be located above the public functions, offering a variety of studio and apartment sizes, as well as a co-housing option for shared living.

Key West is expected to be completed by the end of 2022. 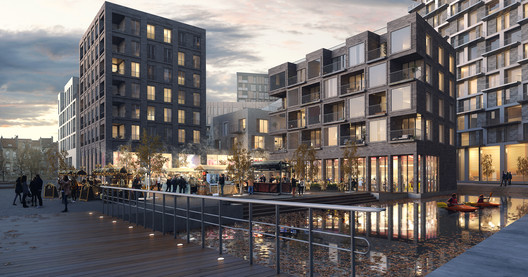