There's an old, weary tune that people sing to caution against being an architect: the long years of academic training, the studio work that takes away from sleep, and the small job market in which too many people are vying for the same positions. When you finally get going, the work is trying as well. Many spend months or even years working on the computer and doing models before seeing any of the designs become concrete. If you're talking about the grind, architects know this well enough from their training, and this time of ceaseless endeavor in the workplace only adds to that despair.

Which is why more and more architects are branching out. Better hours, more interesting opportunities, and a chance to do more than just build models. Furthermore, the skills you learn as an architect, such as being sensitive to space, and being able to grasp the cultural and societal demands of a place, can be put to use in rather interesting ways. Here, 3 editors at ArchDaily talk about being an architect, why they stopped designing buildings, and what they do in their work now.

How did you transition from designing buildings to doing other forms of work?

Romullo Baratto: For me it happened organically. After I graduated I started as a part-time editor at ArchDaily, and I worked the other half of the time in an architectural firm. Crisis struck and they could not pay me anymore, so I stuck with my editorial job.

Crisis struck and they could not pay me anymore, so I stuck with my editorial job.

Han Zhang: For me it was quite a journey. I started as an economist; that was interesting but really not for me. So after completing my Economics and Finance degree I decided to go back to school to study Architecture.

The choice was simple, I always wanted to be able to contribute to bettering the world and architecture was the perfect combination of creativity and practicality, and after all buildings will be the only physical reminders of us after we are gone.

Monica Arellano: I studied dance where everything is about space and sensations. That’s actually pretty similar to architecture. I worked for some time in a foundation that managed the historical heritage of my city and part of my work was publishing books and doing museography. All of that had a lot to do with architecture but not the kind that we are used to in school. I spent a period of time as an architect, but it was in the editorial field that I finally found myself.

How does editorial work fit in?

Romullo: Working as editor for architectural media, you eventually find out other ways of “doing architecture”, by observing what's being done around the world in the borders of the field. I see the editorial work like that as well, as something that belongs to architecture, but not exactly the kind of architecture people are used to seeing.

Han: After the first 3 years or architecture school it also became very obvious to me that my greatest attributes were my ideas and my ability to work with and coordinate people within teams to maximize and deliver the best outcomes. So I decided when I started my masters degree that I was not only going to work as a practicing architect but also in other disciplines within the industry to enable great designs to be realized. Therefore after 6 years working as a intern and junior architect during my studies, 2 years as concept architect after graduation and 2 years as a business developer for architecture offices in China, I joined ArchDaily!

I think we all see our contributions as another form of architecture.

Do you miss designing buildings?

Romullo: Frankly, no. At least not at this point of my life. I actually design buildings and retrofittings sometimes but it is just a pain.

Han: Yes I do, but I have been designing for a large part of my career. Now I enjoy being a part of the design process and the discussion surrounding design with architects at the top of their game. The beauty is that we can always go back because we are trained for it. I don’t miss the difficult clients.

Now I enjoy being a part of the design process and the discussion surrounding design with architects at the top of their game.

What are some reasons people who study architecture don’t become architects?

Romullo: I believe there are various answers. Buildings are expensive, architecture is one of the first fields hit in an economic crisis, such as the one 10 years ago. That is a big reason why there are a lot of architects nowadays who are not building.
The other reason –and this is very connected to the first– is that architecture is so vast it allows you to do a lot of stuff, and either by choice or when push comes to shove in a financial downturn, you can develop these "other faces" of architecture.

Buildings are expensive, architecture is one of the first fields hit in an economic crisis, such as the one 10 years ago. That is a big reason why there are a lot of architects nowadays who are not building.

Han: I think it is a very testing profession. What most people would be surprised to learn is that it is only 10% design, the other 90% is coordination and balancing of different interest groups. A successful architect is someone who is much more than a designer, he or she is a salesman, a technician and a negotiator.

Monica: Yes and I also believe that it is because of the geographic limits of the cities. Although it is true that architecture right now is growing as a field, it would not be possible for all of us to dedicate ourselves to design and construction.

Although it is true that architecture right now is growing as a field, it would not be possible for all of us to dedicate ourselves to design and construction.

Romullo: That is an interesting point. Are there enough jobs, comissions and buildings to be built if all of us decided to design buildings? And most importantly, do we really need more buildings?

Han: There are enough buildings in many of the developing countries. I think a lot of the building stock is of very low quality, but the rest of the world must also recognize the developing world is facing a different set of problems. Desperate responses for desperate situations, quality is not an indulgence that can always be taken.

Monica: I find the most creative architects are aware there is no need to build in the city. They work with what is already built. It's about being sensitive to the environment.

I find the most creative architects are aware there is no need to build in the city. They work with what is already built.

Han: I’d also say the political environment and lack of intellectual development for developing nations are the greatest barriers for good design, not the lack of skills of the architects.

Romullo: I agree 100%. There's this Brazilian urban planner, Jaime Lerner, who is very famous here in Brazil. He used to say architects for the future…actually present! (laughs) don't have to bother about building new stuff, but rather they need to fix our messed cities.

What is interesting and important about the work that you do now?

Monica: I really enjoy learning about the new and exciting architecture. I love this constant search. It is amazing to be in contact with many talented people from my country and from all over the world and to feel so involved in something.

It is important that I represent Chinese architecture in a fair and honest way to the international community. Show the world the architects who are really building the China as Chinese people know her, even in the generic architecture.

Han: And finally, I was very proud of showing the work of He Jingtang and Li Xiangning to the international readers, they are brilliant and celebrated architects in China. The fact that they both have been winners in our BOTY has ignited so much enthusiasm and pride within the design community here. This makes my job very worthwhile.
We are now the number one source for architecture news in China and this opportunity to influence the discourse here has been overwhelming!

Han Zhang is the Head of ArchDaily China. She oversees all aspects of ArchDaily's operations in China, including editorial and sales. She first obtained a Bachelors in Economics and Finance from Monash University, before going to Melbourne University to get a Bachelors and Masters degree in Architecture. She worked as an architect for 8 years before coming on to ArchDaily as China's Country Manager.

Romullo Baratto is an editor at ArchDaily Brazil and often collaborates on projects with Archdaily. He is an architect and urban planner, with a Masters in architecture and Cinema from FAU-USP. Apart from ArchDaily, he also works as an independent photographer and filmmaker at studio Flagrante trying to explore the relations between movement and space through images. He was part of the curatorial team for the 11th São Paulo Architecture Biennial in 2017.

Monica Arellano is in charge of editorial area at Archdaily Mexico. She studied at the Faculty of Architecture, UNAM and participated in the Coreographic Lab "Collective Jumps" with the german choreographer Isabelle Schad. She has collaborated in various museographic and editorial projects with Fundación ICA and worked as an architect at Sinestesia Arquitectos. 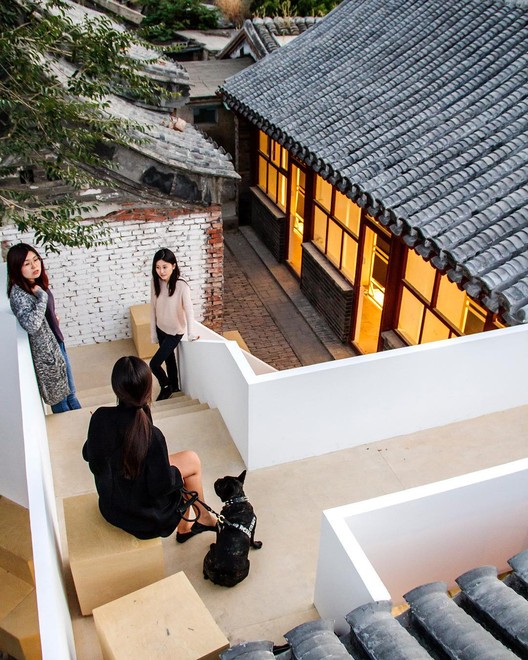