In the Lujiazui financial district in Pudong, Shanghai, Kengo Kuma has reimagined a 1972 shipyard into a new 9,000-square-meter multi-use complex, named Shipyard 1862. Behind original, rugged brick walls, the old shipyard was once defined by a 12 by 30-meter grid, which allowed for massive interior spaces to hold ships. In this industrial-style adaptive reuse project, Kuma was careful to preserve the building’s structural and material integrity. These photographs provided by Julien Lanoo show how the industrial shell has been transformed by the refurbishment project.

“Materiality transcends beyond the visual experience, as it requires all five senses of the human body to engage it, to remember it.” Kuma says.

Original brickwork was restored on the North facade, but the South facade was demolished years ago. For the West facade, Kuma designed a pixelated gradient brick system which connects the North and South by reflecting the unique restored weathered brick and remembering what no longer exists in a contemporary way. Suspended by 8-millimeter-thick stainless steel cables, large clay bricks, in four shades of red, gradually fade in permeability toward the transparent South facade.

Inside, Kuma uses void space to emphasize the structure’s verticality and monumentality. A five-story east-west atrium links two smaller north-south atriums which act as connectors between the city and the Huangpu Riverfront. Panoramic views of the Puxi skyline can be enjoyed from the 800-seat theater in the East wing, while the west wing holds commercial spaces. 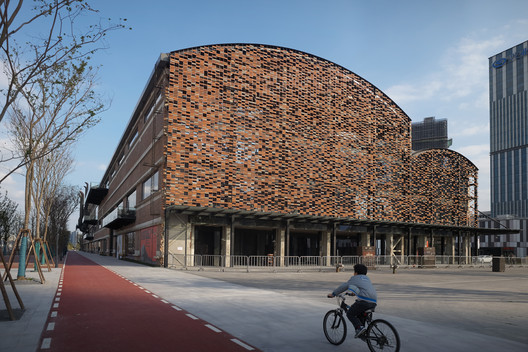