Save
Was the AIA's Failure to Give its Twenty-Five Year Award In 2018 a Snub to Postmodernism?
Share
Or
Copy

This article was originally published by Common Edge as "Did the AIA Take a Pass on Postmodernism?"

People perceive architecture in different ways. “Style” is often an easy classification, traditional or modern. Popular residential work is often categorized dismissively by architects as “vernacular.” The branding of the product of the profession, an oeuvre of work embodied in buildings and their meaning in our culture as celebrated by the American Institute of Architects, has many levels of recognition, from local AIA Chapter Awards, to national Awards.

No AIA Award has more meaning or lustre inside the profession than the “Twenty-five Year Award” for buildings that have “stood the test of time.” The award has been given continuously for the last 56 years. This year, the Design Jury chosen to select a seminal building has opted not to give an award to anything, any building 25-35 years old.

To quote the AIA:

“The jury felt that there were submissions that appeal to architects and there were those that appeal to the public. The consensus was that the Twenty-five Year Award should appeal to both. Unfortunately, this year the jury did not find a submission that it felt achieved twenty-five years of exceptional aesthetic and cultural relevance while also representing the timelessness and positive impact the profession aspires to achieve.”

What does this step back mean?

Great buildings were most assuredly built from 1982 to 1992, during this period when Postmodernism was spawning buildings viewed as trivializing affronts to architectural purity. But surely there were potential backups: High Modernist works that eschewed any vernacular commentary or reference. They couldn’t find one?

Or more probably are we, as a culture, as a profession, in a place where the vagaries of what-means-what are simply too unsettled that any judgment to laud any building is indefensible. The citation of two worlds, “us” (architects) and “them” (the public), as distinct entities is telling. The idea that there are camps when we’re all humans, who all see and use the same buildings, is Balkanizing. This lack of common ground as seen by a room of architects bespeaks a polarization of criteria that demeans both the designers and those they design for.

Part of the intrinsic value of architectural design is that it impacts everyone. Buildings are as essential as the air we breath: their shelter, cultural expression, and aesthetic exploration are as nourishing as any food group. According to this jury, the 1982-1992 period was an architectural food desert.

In that decade, when Stirling, Bohlen, Moore, Roche, and others were producing full speed, no project was worthy of the award. Really?

Sometimes the way we laud architecture means more than what is lauded. Recent competition winners are great sculptures, but have no budgetary feasibility or usefulness. Great commissions often go to “safe” designers doing established product. Ninety-five-percent of American homes have been built before and are constructed to sell, like any other product.

But architects love to love each other: the choir is always on key when they sing for each other. Unless there is no sheet music. Maybe we just do not know if those transitional buildings—from tumultuous PoMo to Established Parametrics—have the impact and value that jury had come to expect.

Maybe it’s because architecture is not so sure of what to expect of itself. Maybe you cannot celebrate the past now if you are unsure of where you are going in the future.

Duo Dickinson has been an architect for more than 30 years. The author of eight books, he is the architecture critic for the New Haven Register, writes on design and culture for the Hartford Courant, and is on the faculty at the Building Beauty Program at UniSOB in Naples, Italy.

NewsArticlesPostmodernismTwenty-five Year AwardAIACommon Edge
Cite: Duo Dickinson. "Was the AIA's Failure to Give its Twenty-Five Year Award In 2018 a Snub to Postmodernism?" 16 Jan 2018. ArchDaily. Accessed . <https://www.archdaily.com/887093/was-the-aias-failure-to-give-its-twenty-five-year-award-in-2018-a-snub-to-postmodernism> ISSN 0719-8884
Save 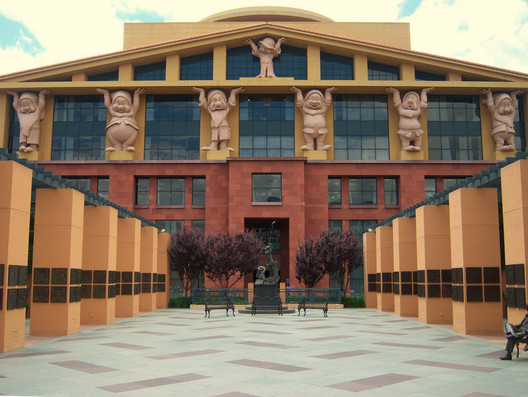