“In our evaluation the lobby does not hold the same level of broad significance,” explained LPC Director of Research Kate Lemos McHale in a letter from the LPC to preservation advocate Thomas Collins. “[With] the removal of ‘Golden Boy‘ as a focal point, alterations within the lobby itself, and its diminished relationship to the overall design of the base, we have determined that it does not rise to the level of an interior landmark.”

Learn more about the battle between developer and preservationists, here and find our earlier coverage of the plans below.

Facing plans for a major renovation that would significantly alter the street presence of the building, Philip Johnson's Postmodern icon, 550 Madison (formerly AT&T Building) has now cleared the first stage in the process of becoming a designated New York City landmark. 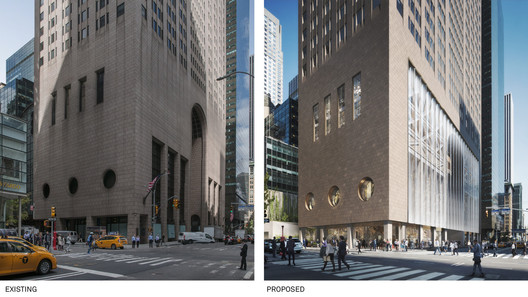