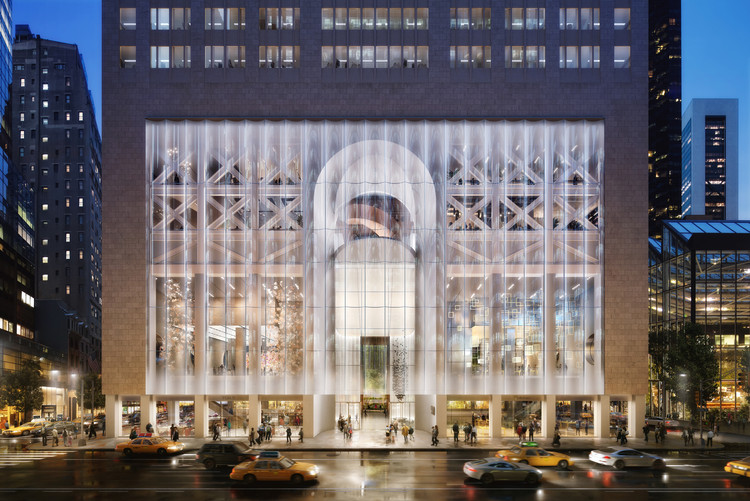 As seen in renderings released with the announcement, the building’s signature ground floor element, its enormous arched entry, will be rendered a shadowy profile of its former self behind the fritted glass curtain wall. The stone on the columns wrapping the building will also be removed, creating a new datum line that makes the rest of the skyscraper appear as if it were hovering.

“From the street, the reconceived façade dramatically highlights the multi-story arched entry while revealing the craftsmanship of the building’s existing steel structure,” explained Snøhetta in a press release. “Scalloped glass references the sculpted forms of fluted stone columns, re-interpreting the building’s monumentality while creating a lively and identifiable public face for passersby. With this increased transparency, the activity within the lobby, atrium, and first 2 levels of the building will become part of the vibrant energy of the street.”

The AT&T Building was originally completed in 1984, designed by Philip Johnson John Burgee Architects as a reaction to the glut of glassy skyscrapers that had been constructed in the city in the previous 30 years. While generally recognized as a seminal pieces of Postmodern architecture, the building was never designated as a city landmark, allowing the renovation to continue forward unimpeded.

Being developed by Olayan America and Chelsfield, the project is estimated to cost $300 million with a completion date set for 2019.

“The re-imagined 550 Madison reflects how we work and live in New York today,” said Snøhetta. “The design sensitively transforms a sculpturally monumental building and celebrates the experience of the building where it meets the street. By updating this inward-looking tower for the 21st century, the redesign will foster a more vibrant, dynamic relationship between the building, the city, and the people who inhabit it.” 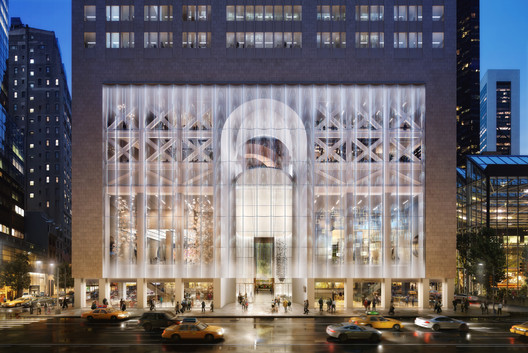