Perhaps the buildings’ most striking features are it’s barrel-shaped windows, appearing to bulge from the building’s masonry walls. To achieve this look, the top, bottom, and sides of the windows are tapered inward (similar to that of a bay window) to create the curved shape. This is not the first time we have seen Heatherwick playing around with this window shape—a similar style can be seen in his Zeitz Museum of Contemporary Art in Cape Town, South Africa.

Although both towers will exhibit these windows, they differ in both size and shape—one likely standing at 22-stories high, and the other at 10—likely an attempt to maximize views on to the Hudson River. The two towers will become one underneath the High Line, giving entrance into the luxury apartment building. The 425,000 development will hold over 17,000 square feet of retail and gallery space, a total of 180 condominiums, as well as other high-end amenities for the residents, such as a fitness center, spa, and 175 on-site parking spots.

“With a site crossing both sides of the High Line there was a unique opportunity to celebrate the urban texture of the elevated park and the distinct character of the Chelsea neighborhood."

“The studio wanted to create a new kind of panoramic visual connection for the building’s residents and re-conceived the residential bay window as a three-dimensional sculpted piece of glazing that provides light-filled interiors as well as exciting internal moments."

"At the smallest scale the raw brick exterior, influenced by Chelsea’s heritage of industrial brick buildings, will give a handmade feel and microtexture to the facade. At the largest scale, the use of the three-dimensional windows will add another distinctive layer of textural character to the fabric of the city.” 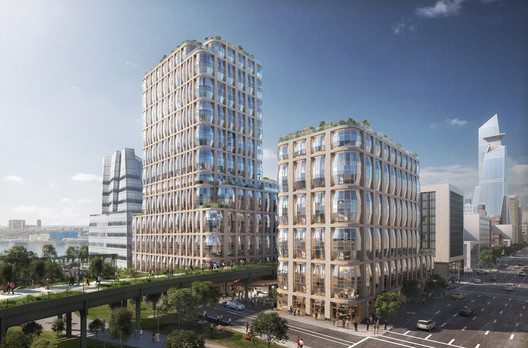