Nyc: The Latest Architecture and News

The New York City Privately Owned Public Space (POPS) Logo Design Competition is being held to solicit a design for a new POPS logo that may be featured on signage at over 550 POPS located across the city. A new POPS logo would be seen by millions of residents, workers, and visitors on any given day and encourage the public to take full advantage of these valuable, but sometimes unknown, public spaces.

Nike House of Innovation 000 continues the athletic brand’s redefinition. As a company that prides itself on the innovative design of its foot and athletic wear, Nike has chosen to design its retail locations to reflect a new generation in sports performance. The House of Innovation maintains a foundation in flexible design, allowing the retailer to provide its patron with an immersive brand experience.

The store concept is described as “one floor, one world.” Each floor, inspired by the sounds and movement of New York, highlights different collections within the Nike brand. The retail program of each floor gets more specific as the levels increase. The 68,000 square-foot, six-level destination is the second Nike House of Innovation. The first was opened in Shanghai last month. These stores are the first of a new generation of sport retail experiences for Nike, numbered sequentially around the globe.

FIGMENT has teamed with the Emerging New York Architects Committee (ENYA) of the American Institute of Architects NY Chapter (AIANY) and the Structural Engineers Association of New York (SEAoNY) to host a competition to design and construct an architectural pavilion in Lighthouse Park on Roosevelt Island, the City of Dreams Pavilion. The 2019 pavilion will be our ninth City of Dreams Pavilion, and our first on Roosevelt Island.

The City of Dreams Pavilion will be a gathering place for people to meet, learn about the arts programs on Roosevelt Island, enjoy a performance or lecture, and enjoy this temporary structure.

VeloNotte at the Museum – 14 Cities on Earth

VeloNotte, international urban history startup on two wheels, celebrates its 10th anniversary of their nocturnal tours with an exhibition-workout in the Schusev Museum of Architecture in Moscow. Just a few steps from Kremlin, Velonotte converts the room of the 18th-century mansion into a cycling studio. Once you start to pedal the journey will bring you to one of the cities that the project explored so far with speakers like Richard Rogers, David Adjaye, Richard Burdett, Peter Ackroyd, Vladimir Paperny, Jean-Louis Cohen. The exhibition will feature amateur videos selected by curators from the posts of the more than 100,000 participants of Velonotte

Which Architecture Firms Are Building the Most in New York City?

In an industry-affiliated overshadowed by the so-called ‘starchitects’, do we really know who is dominating in the field of architecture? Often it is found that for most of the projects bearing the big names, there are the firms assuming the roles of “executive architect” that work behind the scenes to enable the high-profile buildings to get through planning and construction.

To give us insight into which architecture practices actually have the most impact across in New York City, The Real Deal have compiled a list of the 30 firms with the highest square footage of new buildings across the five boroughs over a six-year period from the 1st of January 2012 until the 31st of January 2018. There are of course many of the firms that you would expect, although as you will see there are also a few that have gone under the radar so far and may be worth watching out for in the future...

The NYCxDESIGN Awards honors outstanding products and projects in categories that span major areas of design, from architecture to interiors, from products to accessories, from craft to technology. Submissions are reviewed by a jury of design industry leaders. Winners and Honorees represent the very best design talent and are recognized at an awards ceremony and party on May 21 at the newly renovated Pier 17 at NYC's South Street Seaport. Winners will be published in Interior Design magazine, promoted on Interior Design’s digital channels, and presented with a custom award created by Lladró. Now in its third year, the NYCxDESIGN Awards is the highlight of NYCxDESIGN. Taking place this year from May 11-23, NYCxDESIGN showcases over a dozen design disciplines through exhibitions, installations, trade shows, panels, product launches, open studios, and more across the city’s five boroughs.

AIA Brooklyn + Queens Design Awards 2018 launched in collaboration with AIA Bronx. With the growth of new development and renovation in our boroughs over the past five years, our professional associations are excited to collaborate on this event tailored to professions of the built environment that we all share. 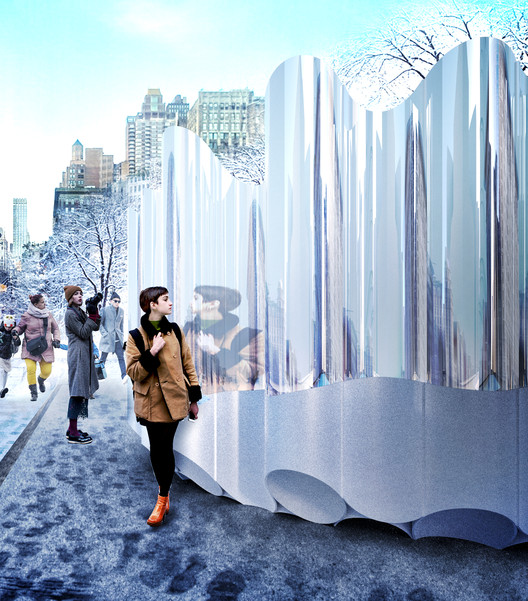 The city of New York is connecting all 32-miles of coastline with public amenities, piece by piece. To link the East River’s greenways, the interdisciplinary practice, wHY has submitted an RFP to the New York City Economic Development Corporation for the 1.1-mile long coastal stretch.

The landscape and urban design workshop as part of wHY -- wHY GROUNDS, has tackled the linear site, stretching from 53rd to 61st street, encompassing 1.72-acres of public space. The site is exceptional with its views to Roosevelt Island, the Queensborough Bridge, the Queens/Brooklyn waterfront and down to Lower Manhattan.

Exhibition: Scaffolding at Center for Architecture

Scaffolding curated by Greg Barton, examines the extraordinary applications of scaffolding as a kit-of-parts technology to provide novel forms of inhabitation and access. Through an installation designed by Shohei Shigematsu and OMA New York with graphic design by MTWTF, Scaffolding will disrupt the architectural space of the Center for Architecture, instilling a new appreciation of scaffolding and its transformative potential.

Of particular interest to our local New York City audience, scaffolding is a flexible and accessible system hiding in plain sight. Despite its indispensable link to architecture, scaffolding is too often maligned as a necessary nuisance. The exhibition demonstrates how this

Vision Zero is an initiative that started in Sweden in 1997 when the country began implementing a series of road safety measures to reach their goal of zero deaths from traffic accidents. As a result, the country managed to reduce the number of deaths to 3 people per 100 thousand inhabitants.

Since then the plan has been adopted by different cities and has inspired the creation of various organizations that are looking to make our streets a safer places. One of them being the Vision Zero Network that brings together traffic engineers, health professionals, local leaders, and policy makers.

Digital technologies heighten our awareness of ongoing conflicts around the world. A main strategic focus for Storefront in 2017 is to investigate the ways in which art, architecture, and design participate in the articulation and resolution of local and global struggles affecting individuals and collectives around the world.

Storefront announces a call for a one-year Program and Strategy Fellow who will develop and present a critical new project: Architecture Conflicts. This grant-funded position aims to reach candidates from underrepresented backgrounds and communities that have faced barriers to entry for leadership roles on major global projects. The fellow will work alongside Storefront's team in New York City.

Build Your Own Subway System with This New Game

In New York City, as in many cities worldwide, residents rely on the subway system to get around. But despite its importance, there are still plenty of locations throughout the city so difficult to get to, it’ll leave you cursing, “Who designed this thing anyway!?”

Now thanks to a new game from engineer Jason Wright, you have a chance to correct the design flaws of the current system – virtually, anyway.

The Arthur Ross Architecture Gallery at Columbia GSAPP presents The Other Architect, an exhibition of architects who expanded their role in society to shape the contemporary cultural agenda without the intervention of built form. On display are twenty-three case studies dating from the 1960s to today that illustrate how international and often multidisciplinary groups applied experimental attitudes and collaborative strategies to invent new tools and alternative methods outside of traditional design practice.

Aileen Kwun and Bryn Smith, two New York writers and designers, introduce a panel of lifelong luminaries in their fields, whether it’s architecture, graphic design, or criticism, all in their ninth decade. Their book, Twenty Over Eighty, delves into what's changed, what's stayed the same, and what brought these legends in their fields to their current stature--don’t miss an expansive conversation the history of design! Panelists will include Seymour Chwast, Jack Lenor Larsen, and Jane Thompson.

New interior images have been released of Studio Gang's's Vista Tower, a 95-story luxury residential high rise located in Chicago. Upon completion, Vista Tower will become the third tallest tower in the city.