“Thanks to the generous donations by a group of philanthropists, Ilham Gallery now has a prestigious architectural commission in its collection,” said said Ilham Gallery director Rahel Joseph.

“It was a surprising yet very welcome bit of news to be the new custodian of this exciting work.”

While the exact location of the pavilion is yet to be determined, Ilham Gallery currently owns two permanent installations – Divina Proportione by Chinese artist Ai Weiwei and Breast Stupa Topiary by Thai artist Pinaree Sanpitak – both of which are located at the entrance to Ilham Tower.

“It’s too large for Ilham and we want to put it in a public space for all to enjoy. We are looking for a space for it in the Klang Valley,” said Joseph.

The structure follows in the tradition of Serpentine Pavilions finding new homes across the globe. Last year’s structure, designed by BIG, has been relocated to Vancouver. Other examples include Zaha Hadid’s 2007 design, re-erected at Chatsworth House in Derbyshire, England, and Toyo Ito/Cecil Balmond’s 2002 pavilion, which now serves as a beachside restaurant at the luxury hotel Le Beauvallon on the Côte d’Azur in France. Other pavilions have also been purchased by private owners.

News via the Star.

Following the opening of the 2017 Serpentine Pavilion, designed this year by Diébédo Francis Kéré ( Kéré Architecture), photographer Laurian Ghinitoiu has turned his lens to London. Designed to mimic a tree, or a canopy of trees, the wooden structure has been designed to fuse cultural references from Kéré's home town of Gando in Burkino Faso with more "experimental" construction techniques.

London's annual temporary architecture pavilion spectacular has returned. Each summer the Serpentine Pavilion program selects an accomplished architect who has yet to create work in the United Kingdom, and asks them to build a temporary shelter on the gallery's lawn. The resulting structure is erected in June and dismantled in October. 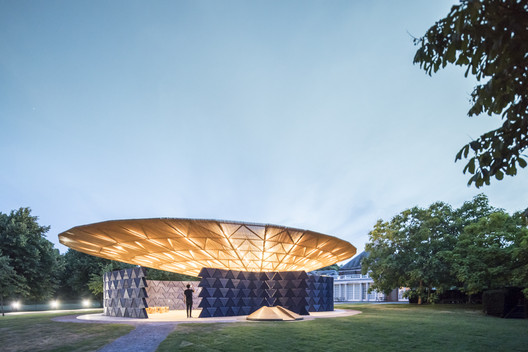