The complications of war and violence demanded a bold piece of architecture to provoke the public's understanding of the impact it had on Germany. Daniel Libeskind chooses to engage with such events in his extension to Dresden's Military History Museum, by crashing a huge steel and concrete structure through the neoclassical facade, tearing apart the symmetry of the original building. Photographer Alexandra Timpau has captured the sharp edges and harsh angles of the museum's extension that convey the pain and the stark reality of war Libeskind and the museum refer to. 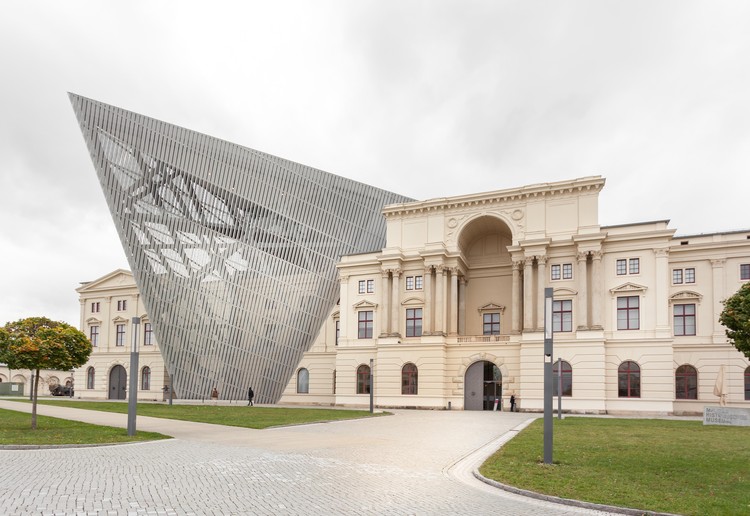 I wanted to create a bold interruption, a fundamental dislocation, to penetrate the historic arsenal and create a new experience - Daniel Libeskind 2011.

In her photographs, Timpau plays with the materiality as natural light bleeds down the cast concrete interior from small slits in the building's face and studies the details that Libeskind has minutely considered over the last decade since first winning the commission in 2001.

Built in 1897, the Military History Museum has lived many lives as a Saxon armory, a Nazi museum, a Soviet museum and an East German museum, finally being deserted in 1989 until the government saw potential in a museum for the military history of a united and democratic Germany. The new extension shines a new light on violence whilst taking an anthropological approach, considering the human causes and effects.

Protruding out from the main body of the building, the 200-ton extension holds a 99ft viewing platform that offers views across the historic city. The 21,000 square feet exhibition space makes it Germany's largest museum, holding the title of the official central museum of the German Armed Forces. A survivor of war, the building avoided any damage during the allied bombing of World War Two thanks to its location on the outskirts of Dresden, it is an ode to the past as a veteran that has experienced the events of violence itself.

27 Text description provided by the architects. Daniel Libeskind's Military History Museum opens today in Dresden. "I wanted to create a bold interruption, a fundamental dislocation, to penetrate the historic arsenal ..." - Daniel Libeskind, 2011 "It was not my intention to preserve the museum's facade and just add an invisible extension in the back. 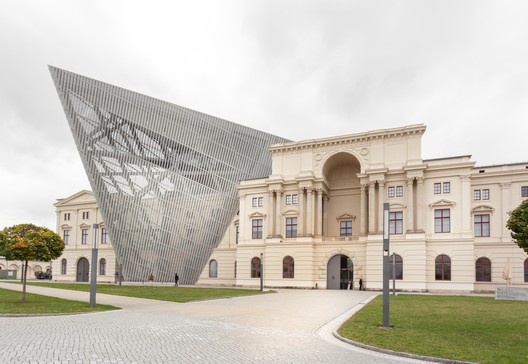