"The Glass Chain" (Die Gläserne Kette in its native German) was an exchange of written letters initiated by Bruno Taut in November 1919. The correspondence lasted only a year, and included the likes of Walter Gropius, Hans Scharoun, and Paul Gösch. In the letters, the penfriends—thirteen in all—speculated and fantasized about the possibilities of glass, imagining, in the words of Fredrik Hellberg and Lara Lesmes (Space Popular), "fluid and organic glass follies and colourful crystal cathedrals covering entire mountain chains and even reaching into space." 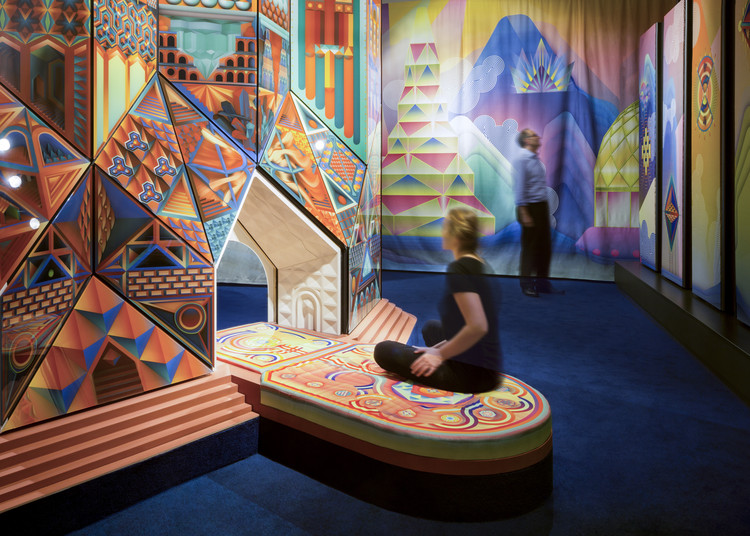 Almost a century since the correspondence ceased, Space Popular (SPOP) have sought to reignite the conversation by way of an exhibition of installations at London's Sto Werkstatt. As early Modernism took hold, glass "became a peripheral material of windows and walls," the practice argue. In their installation they have, according to Sto, picked up the mantle to "wrest glass from its Modernist confines, and set it free." SPOP have, at the same time, sought to utilize the possibilities of Virtual Reality in designing and experiencing architecture.

Working with StoVentec Glass and briefed by the commissioners to "redefine the limitations of the material", SPOP have designed and constructed a bright, bold, highly colorful totem and, in so doing, exploring differing ranges of scale, "playing with our visual perception of glass doorways as grand arches and small steps as giant pediments." According to Sto, the practice teamed up with "technical experts to realise a kaleidoscopic glass construction that uses glass to enhance, alter and question human perception of space."

The Glass Chain is on display at Sto Werkstatt (London) until September 29 2017.