Updated renderings have been revealed for renowned architect Helmut Jahn’s 1000M, an upcoming 832-foot skyscraper that will take the place of a currently vacant lot on Chicago’s historic Michigan Avenue. Accommodating 323 luxury residences and over 40,000 square feet of amenities, the building will be clad in a green and blue glass curtainwall, with horizontal metal spandrels running across and dividing it. The roof terrace is covered by a hovering metallic mesh crown, which is shown in the new renderings.

Construction on 1000M is scheduled to begin in 2018, with the skyscraper expected to be completed and ready for occupancy in 2021.

Renderings have been revealed for a new 832-foot-tall skyscraper that will rise from a current vacant lot on Chicago's historic Michigan Avenue. Known as 1000M, the tower has been designed by JAHN, the practice helmed by one of Chicago's most prolific architects, Helmut Jahn. 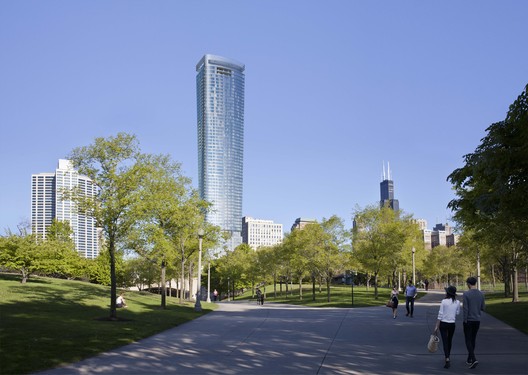