Renderings have been revealed for a new 832-foot-tall skyscraper that will rise from a current vacant lot on Chicago’s historic Michigan Avenue. Known as 1000M, the tower has been designed by JAHN, the practice helmed by one of Chicago’s most prolific architects, Helmut Jahn. The 74-story building will feature a blue-green glass curtain wall subdivided with metal horizontal spandrel panels, and a metallic mesh crown hovering over a rooftop terrace.

The project joins a number of new developments in Chicago’s South Loop neighborhood, including a residential tower by Rafael Viñoly Architects. Construction on the project is expected to begin in 2018, with some site preparation work already in progress. The building is planned to open in 2021.

Other notable projects by JAHN include the Thompson Center, which is currently being threatened with demolition. 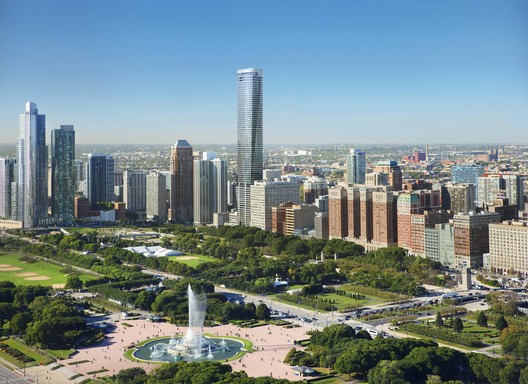