"As a precaution," the British Prime Minister Theresa May told the House of Commons today, "the [UK] Government has arranged to test cladding in all relevant tower blocks." This initial investigation ordered by the British Government following the devastating fire and loss of life at Grenfell House in London on June 14, have returned initial results which show that "three samples," according to the BBC, "are 'combustible'." Further results are expected to be made public over the course of the next 48 hours. The Prime Minister also declared that:

No stone will be left unturned. For any guilty parties there will be nowhere to hide.

The implications for landlords and clients, architects, engineers, and contractors following these results are potentially far-reaching. The type of cladding used—Reynobond PE ("PE" indicating polyethylene)—"passed all building regulation checks by Haringey Council," the BBC has been told. As a result, the UK Department for Communities and Local Government (DCLG) are now coordinating facilities and a process to permit 100 samples per day, requested and sent from residential towers around the country which have aluminium composite material on their façades, to be tested. A spokesperson for Downing Street, following the Prime Minister's Commons statement, has said:

In terms of how many buildings and how many homes have this type of cladding, the estimate provided to us by councils is that there are approximately 600 high-rise buildings with similar cladding.

According to the manufacturer, Arconic Architectural Products, Reynobond PE "features a polyethylene core that adds strength and rigidity to the coil-coated aluminum panels." This "maximizes its flexibility and formability, while maintaining a lightweight for easy installation." Another version of the material, Reynobond FR—which was not used on Grenfell House—"adds an extra layer of protection." It is "manufactured just like Reynobond PE, but with a fire-retardant mineral core that guarantees higher resistance to fire. These panels meet or exceed national model building code requirements without exception."

As Central London Residential Tower is Subject to Devastating Fire and Loss of Life, Questions Raised About Recent Refurbishment

A 24-storey residential tower-Grenfell House-in North Kensington, London, has been subject to a devastating fire and subsequent loss of life. At the time of reporting, twelve people have died as a result of the blaze (a number which is expected to rise) and, according to the , "more than 70 people [are currently being] treated at five London hospitals" with "20 in critical care." 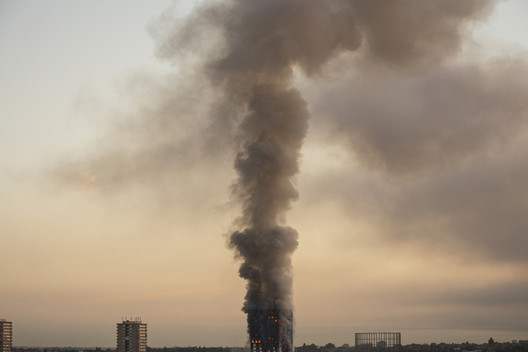