Save
As Central London Residential Tower is Subject to Devastating Fire and Loss of Life, Questions Raised About Recent Refurbishment
Share
Or
Copy

A 24-storey residential tower—Grenfell House—in North Kensington, London, has been subject to a devastating fire and extensive subsequent loss of life. 200 firefighters in 45 fire engines attended the scene following reports of fire at around 0100 local time. The building, originally constructed in 1974, underwent a restoration by Studio E [at this time their website is not responding] "less than two years ago," reports the Architects' Journal.

In 2012, Building Design reported that Studio E had been appointed to refurbish Grenfell to the tune of £8.6million ($11million). This commission was to involve "energy efficiency improvements and improvements to public space at ground level" – "the tower will be fitted with external cladding to provide a rain screen and flats will receive double glazing. Flats will also be fitted with new heating and water systems." As told to the BBC and reported in the Architects' Journal, Member of Parliament, former firefighter and Minister for Policing, Fire and Criminal Justice and Victims Mike Penning said that he "believed the cladding used on the exterior of the building [to be] responsible for spreading the fire."

Worryingly, it appears that a local activist group called the "Grenfell Action Group", formed in 2010, had raised explicit concerns about the safety of residents in the tower in case of fire – warnings which, in their words, "fell on deaf ears." A blog post from the group, published at 05.00 local time today, reads:

Regular readers of this blog will know that we have posted numerous warnings in recent years about the very poor fire safety standards at Grenfell Tower and elsewhere in RBKC. ALL OUR WARNINGS FELL ON DEAF EARS and we predicted that a catastrophe like this was inevitable and just a matter of time.

You can follow the story on the BBC. News via Architects' Journal, Building Design.

Update [22/06/2017]: certain information in this article has been updated to reflect more accurately facts emerging from the investigation into the cause of the fire at Grenfell House.

"As a precaution," the British Prime Minister Theresa May told the House of Commons today, "the [British] Government has arranged to test cladding in all relevant tower blocks." This initial investigation ordered by the UK Government following the devastating fire and loss of life at Grenfell House in North Kensington, London, on the June 14 have returned results showing that "three samples," according to the BBC, "are 'combustible'." 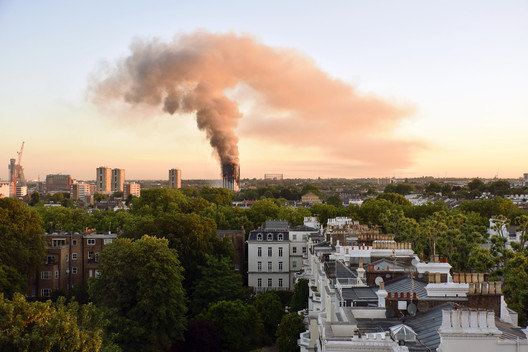